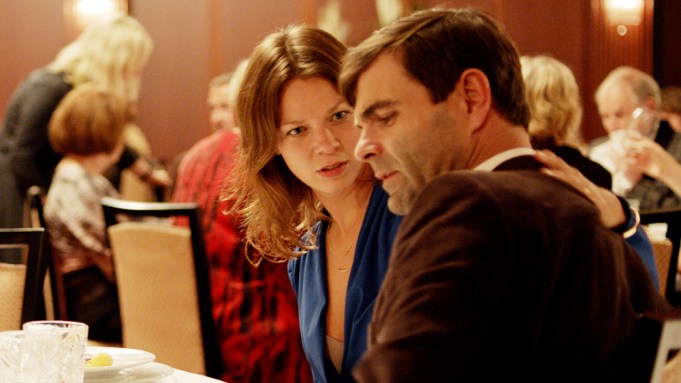 MUNICH — Florian Eichinger won best director at the German Cinema New Talent Awards, which took place Friday at the Munich Film Festival, with his second feature, “Hands of a Mother.” The film’s Andreas Döhler, who plays a man who suddenly recalls being abused by his mother, was named best actor.

The jury, composed of Nicole Gerhards, Dietrich Brüggemann and Johann von Bülow, called it “a film that made us hold our breath, and nevertheless shows a way out of hopelessness.”

The award for best production went to Jana Raschke and Igor Dovgal for “House Without Roof,” in which director Soleen Yusef tells the story of three siblings’ odyssey trying to fulfil their mother’s last wish, and take her to be buried in their village in Kurdistan.

The jury said it was a film that “impresses us with its truthfulness, making us laugh with its light touch and laconic humor, and which leaves us speechless with its sadness and the suffering of people in this war-torn part of the world.”

“Dinky Sinky” won the award for best screenplay. In her graduating film at Munich film school, HFF, writer-director Mareille Klein tells the story of a woman who does everything to fulfil her wish for children.

The awards are open to directors, writers and actors in the New German Cinema section who have made three films or fewer, or six in the case of producers.

The prize money for the awards totaled 70,000 Euros, which was donated by Bavaria Film, Bayerischer Rundfunk and DZ Bank.

GERMAN CINEMA NEW TALENT AWARD WINNERS:
GERMAN CINEMA NEW TALENT AWARD BEST DIRECTOR (30,000 EUROS)
Florian Eichinger for “Hands of a Mother”
The jury: “We watch with bated breath as a well-kept family secret is unearthed layer by layer. A mother who has caused her children unfathomable pain by abusing them, and a father who was too weak to protect them. An experience so painful our hero could only deal with it by denial – until an excellently portrayed denouement throws his well-ordered life [into a spin]. A story of pain so great and so credible, it takes an especially finely honed storyline to capture all its characters’ intelligent psychology, with precise direction in every scene. A film that made us hold our breath, and nevertheless shows a way out of hopelessness.”

GERMAN CINEMA NEW TALENT AWARD BEST ACTOR (10,000 EUROS)
Andreas Döhler for “Hands of a Mother”
The jury: “Standing before the camera means stripping yourself bare, even if you leave your clothes on. The camera is ruthless. It can expose us humans in all our misery. What an achievement, what courage, to portray a character so miserable, while giving it an indomitable spirit and determination at the same time, which carries and propels the plot. A grown man, who was abused as a boy, which overshadows and paralyzes his whole life. A man who is still a boy, whose parents abused him terribly. A man who is almost crushed by all these revelations, but who prevails in the end with a few words and gestures.”

GERMAN CINEMA NEW TALENT AWARD BEST SCREENPLAY (10,000 EUROS)
Mareille Klein for “Dinky Sinky”
The jury: “A woman who wants to get pregnant. Or: A couple who want to have a child. But the couple doesn’t hold out for long – the man takes off, leaving the woman to wander through the movie, at once aimless and driven, with a sober gaze, who stumbles into every embarrassment with great elegance. Every character in this story has wishes and desires which we can read very clearly. The screenplay doesn’t pussyfoot around the fact you can’t always get what you want, but sometimes you get what embarrasses you terribly – before your friends, yourself or the angry parents of a class who want to know why in hell their kids’ sports teacher is calculating their fertile days.”

“Dinky Sinky” was produced by Luethje Schneider Hörl I Film in coproduction with Nordpolaris, in collaboration with Bayerischer Rundfunk.
Written/directed by Mareille Klein

GERMAN CINEMA NEW TALENT AWARD BEST PRODUCTION (20,000 EUROS)
Jana Raschke and Igor Dovgal for “House Without Roof”
The jury: “Three siblings Jan, Alan and Liya, born in Iraqi Kurdistan, raised in Germany, have to travel to their Kurdish home town to fulfill their mother’s last wish of being buried there at their father’s side. A stirring film about family, home and belonging. With their partner Mehmet Aktas, and writer/director Soleen Yusef, producers Jana Raschke and Igor Dovgal made a powerful film with wonderful characters, whom we have the privilege of accompanying on their journey to Kurdistan, seeing old wounds break out again, long-held secrets suddenly come to light and estranged siblings bond together again. A journey to the heart of a family.

“Working with modest means, under very difficult circumstances, the producers gave us a film of impressive veracity, of amusing light-handedness and laconic wit, and of a sadness which makes us speechless with all the pain the war in this part of the world is causing.”

“House Without Roof” was produced by Mîtosfilm in coproduction with Essence Film, in collaboration with Südwestrundfunk and Arte.
Written/directed by Soleen Yusef