IFC distributes the crime drama in the U.S. later in 2016 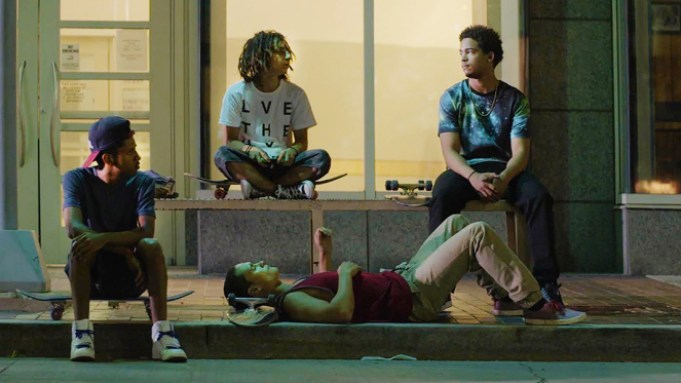 Written and directed by Steven Caple Jr. in his feature debut, this slice of Cleveland youth culture features the on-screen presence of hip-hop stars Erykah Badu and Colson Baker (aka Machine Gun Kelly) and a soundtrack which Westerhoff calls a “who’s who” of American hip-hop artists. These include Nas, Erykah Badu, Machine Gun Kelly, Ezzy, Nosaj Thing, Pusha T. Fashawn and Kanye West.

Exec produced by Nas, and world premiering in Sundance’s Next section, “The Land” will be rolled out in U.S. theaters later tis year, accompanied by a roster of live concerts from soundtrack featured artists. Mass Appeal will release the soundtrack.

A portrait of four kids trapped in an inner-city Cleveland Ohio spiral of poverty and crime, “The Land” tracks Cisco (Landeborg) and three friends who spend their free time skateboarding and stealing cars for cash. To finance their entry into a major skateboarding competition, which could help them turn pro, they decide to hold on ecstasy they find in a drug dealers’ truck. That plunges them into the web of the local drug queen-pin, and their motley brotherhood is tested – threatening to make this summer their last.

Variety has also had exclusive access to the film’s teaser trailer.

“I wanted to showcase the reality of urban youth today: For the audience to witness that those we consider thugs or criminals are often really just kids, and could be a brother, a cousin, or the kid down the street from you,” Caple said.

Film Constellation’s Westerhoff added: “The Land”  brilliantly captures the freedom and escapism associated to skateboarding, but also the violence that surrounds these kids, in a very realistic style. It is a moving account of growing up too fast, and we’re delighted to work with Steven on his impressive debut feature.”