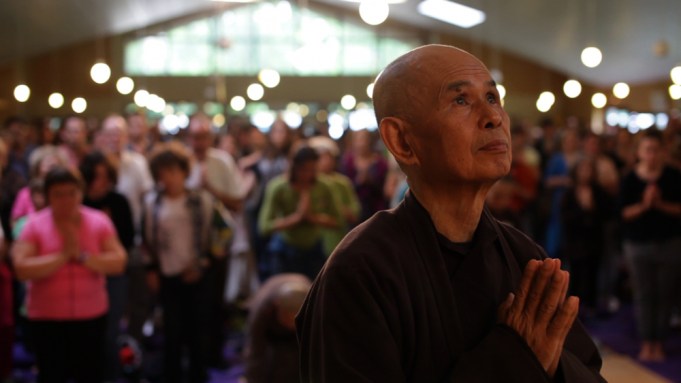 WestEnd Films has acquired worldwide rights to “Walk With Me,” a documentary film about mindfulness and spiritual leader Thich Nhat Hanh, narrated by Benedict Cumberbatch. Variety has been given exclusive access to the first international trailer. The Speakit Films’ movie is directed by Marc J. Francis (“Black Gold”) and Max Pugh (“The Road to Freedom Peak”).

Cumberbatch, Oscar-nominated for “The Imitation Game” and an Emmy winner for “Sherlock,” said: “In my life I’ve been so touched by the teachings of Thich Nhat Hanh. It was a great honor to work on ‘Walk With Me.’ I have no doubt that audiences across the world will be moved by this beautifully crafted film.”

The documentary is “a cinematic journey into the world of mindfulness — the practice of bringing one’s attention to the present moment — and Thich Nhat Hanh, known as ‘The Father of Mindfulness,’ ‘The Other Dalai Lama’ and ‘The Zen Master who fills stadiums,’” WestEnd said in statement.

Two-time Oscar-winning director Alejandro G. Inarritu said “Walk With Me” is “a moving and wonderful film that captures the essence, depth and the poetry of Thich Nhat Hanh — a great work full of love.”

“Filmed over three years and with unprecedented access, this visceral film offers a rare insight into a community of people who have left their families and given up all their possessions to practice the art of mindfulness at the Plum Village monastery in rural France,” WestEnd said.

“Walk With Me” is produced by Pugh and Francis, and executive produced by Nick Francis (“Black Gold,” “When China Met Africa”). One third of “Walk With Me’s” budget has been crowd-funded.