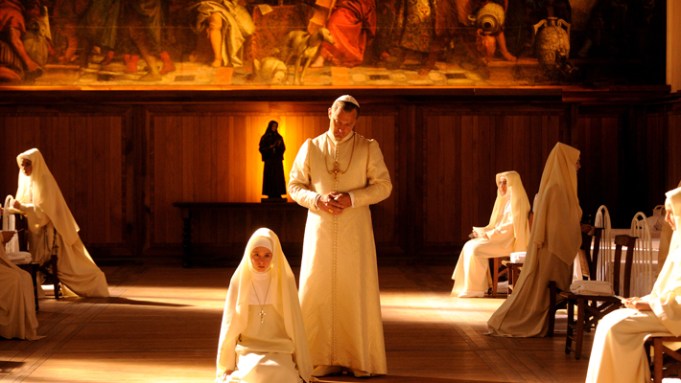 The “Pope” Lido launch will precede the three-pronged Sky, HBO and Canal Plus production’s October air date on Sky’s Sky Atlantic channel in the five countries in which the pan-European pay-TV operates.  They are: Italy, UK, Germany, Ireland and Austria. In France it will go out on Canal Plus. Other dates, including the U.S. bow on HBO, will follow.

The show, which marks the first foray into TV by the director who won a foreign language Oscar with “The Great Beauty,” also stars Diane Keaton as a nun, her first recurring role in a TV series.

Its top notch international cast also comprises James Cromwell, who plays Cardinal Michael Spencer, Lenny’s mentor; Silvio Orlando in the role of Cardinal Voiello, the Secretary of State; Scott Shepherd, who plays Cardinal Dussolier, from South America; Cecile de France as Sofia, in charge of marketing at Vatican City; and Ludivine Sagnier as Esther the wife of a Swiss guard.

The two-episode Venice preem will take place on September 3 in the Lido’s Sala Grande, out-of-competition, with Law likely to be on the red carpet.

Though Sorrentino is known as a regular at Cannes, where “Il Divo” and “The Great Beauty” both launched, his first film, “One Man Up,” launched from the Lido in 2001.

“It is an honor for me to return to Venice,” Sorrentino said in a statement. “I was here with my first film, and now I’m returning with my first television series.”

“Since I don’t believe in coincidences, I prefer to think that, today like back then, the festival is daring to choose. Fifteen years ago, it did so by selecting a young director’s first movie; this year by reaffirming its open-mindedness toward television,” he added. 

Venice artistic director Alberto Barbera struck a similar note calling Sorrentino “a filmmaker who dares to take risks” as he  “tackles the language of television series, the new expressive frontier which many filmmakers – primarily foreign – have already tried their hand at.”

The fact that the producers are showing “Pope” in Venice before it airs is a clear indication they are confident they have a hit on their hands. Critics at the Lido, especially Italian ones, are known to be prickly.

These are notes about the Sorrentino series from a Sky statement:

“Lenny Belardo, aka Pius XIII, is the first American Pope in history. Young and charming, his election might seem the result of a simple and effective media strategy by the College of Cardinals. But, as we know, appearances can be deceptive. Especially in the place and among the people who have chosen the great mystery of God as the guiding light of their existence. That place is the Vatican and those people are the leaders of the Catholic Church. And the most mysterious and contradictory figure of all turns out to be Pius XIII himself. Shrewd and naïve, old-fashioned and very modern, doubtful and resolute, ironic, pedantic, hurt and ruthless, Pius XIII tries to walk the long path of human loneliness to find a God for mankind. And for himself.”

The 73rd edition of Venice will run August 31-September 10. The lineup will be announced on July 28.