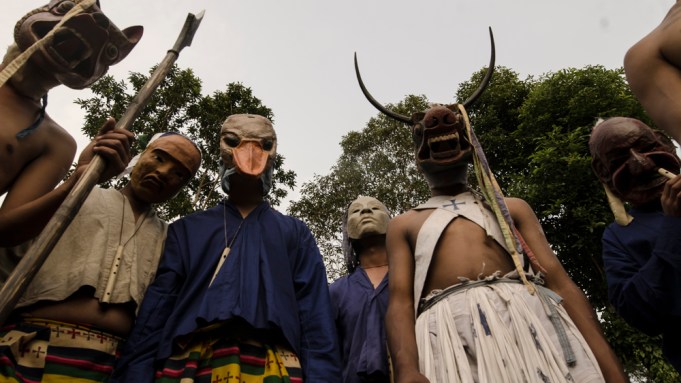 Variety has been given exclusive access to a teaser for Bhutanese director Kyentse Norbu’s “Hema Hema: Sing Me a Song While I Wait,” which will play in Toronto Film Festival’s competitive Platform section.

The action in “Hema Hema” takes place deep in a forest, where a secret gathering “celebrates anonymity.” “Masked, the men and women participate in ancient rituals and dances from the full moon to the new moon. The large group has been specifically chosen by old leader Agay, but his reasons remain mysterious. Having given up their identities, the chosen are playful and lascivious in the lush mountain nature,” according to a statement from the filmmaker.

“But not all here is fun and games. There is harsh punishment for those who break the rules, those who succumb to the temptation of letting others know who they are or those who are too curious about others. Cliques form and invite deception, seduction and jealousy.”

The director’s inspirations for the film were both ancient and modern. His interest in anonymity came from a fascination in “the world and culture of chat rooms, and how scary, rewarding, blissful, and depressing they can be.”

In a statement he explains: “Chat rooms reveal how we human beings sometimes do and say things we wouldn’t dare do or say if people knew who was doing it, and also how – when our identity is concealed – we wouldn’t do what we’re conventionally expected to do. So in chat rooms, people often adopt characters and images that hide their identity, sometimes just for fun, sometimes trying very seriously to express who they think they really are, sometime to idealize someone else, or for any variety of reasons.”

Thomas comments: “It’s been a great experience to work with Khyentse Norbu since our first time working together on ‘Little Buddha’ in 1993 when he was Bertolucci’s technical advisor. He showed his great knowledge of cinema history and technique, and I think he caught a cinema virus on that set.

“I was excited to support his future work as a writer/director, starting with the worldwide hit ‘The Cup’ to his latest film ‘Hema Hema’. I feel Khyentse Rinpoche’s cinema has truly evolved. ‘Hema Hema’ is compelling filmmaking, both sophisticated and primitive. It’s a unique invitation to a secret world.”