Renee Zellweger: If She No Longer Looks Like Herself, Has She Become a Different Actress? 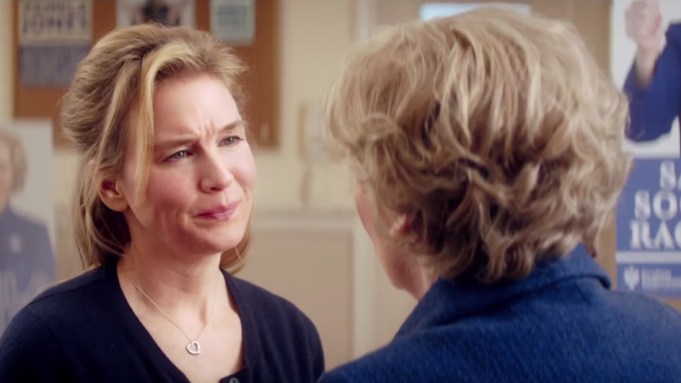 It’s a ritual of our vanity-fueled image culture. You go to see a movie that features an actress or actor — in most cases it’s an actress — you know well, and somehow she looks…different. Her nose is thinner, or her lips are fuller, or her lips are thinner and her cheeks are bolder, or her forehead is younger, or maybe you can’t even quite put your finger on what the difference is, but you know it’s there. Like everyone else, I’ve had this experience and then followed it with a makeshift seminar of perusing photographs on the Internet, scouring them for the before-and-after truth, which always comes down to one question: Did she or didn’t she?

As familiar as the situation is, though, I was caught off guard the other day when I saw the trailer for “Bridget Jones’s Baby.” The movie’s star, Renée Zellweger, already had her “Did she or didn’t she?” moment back in 2014, and I had followed the round-the-world scrutinizing of her image that went along with it, but this was different. Watching the trailer, I didn’t stare at the actress and think: She doesn’t look like Renée Zellweger. I thought: She doesn’t look like Bridget Jones! Oddly, that made it matter more. Celebrities, like anyone else, have the right to look however they want, but the characters they play become part of us. I suddenly felt like something had been taken away.

In mainstream media, we’re not allowed to say that a famous person has “had work done” (unless they own up to it themselves, à la Joan Rivers or Sharon Osbourne), because our coin of credibility is the reporting of facts and information, and the truth is: We do not know. This can, on occasion, result in absurdities of bending over backwards, as when the media felt compelled to say that Michael Jackson’s face looked like it might possibly, conceivably be, yes, maybe a shade lighter than it was in the 1980s — when his skin had, in fact, become the color of a fossilized dinosaur egg. In the case of Renée Zellweger, it may look to a great many people like something more than an elaborate makeup job has taken place, but we can’t say for sure. What we can say is that if that happened, it reflects something indescribably sad about our culture. For in addition to being a great actress, Zellweger, as much or more than any star of her era, has been a poster girl for the notion that each and every one of us is beautiful in just the way God made us.

She became that poster girl in a meaningful and quietly explosive way, on the movie that made her a star. In 1996, when director Cameron Crowe cast her opposite Tom Cruise in “Jerry Maguire,” the 26-year-old actress from Texas barely had the resumé of a next big thing. She’d had a walk-on in “Dazed and Confused” (even in that cast of unknowns, there are a dozen actors with tiny roles you remember more), and she’d starred in two no-profile pieces of indie grunge — “Love and a .45” and “Texas Chainsaw Massacre: The Next Generation” — along with the innocuous “Empire Records.” She had barely entered that Gretchen Mol zone of theoretical future limelight.

So here’s the thing: You have to realize just how radical it was that this nobody, who looked not so much like the sort of actress who would star in a Tom Cruise movie as the personal assistant to the sort of actress who would star in a Tom Cruise movie, was suddenly…starring in a Tom Cruise movie. There was a Vivien Leigh in “Gone with the Wind” vibe to it. Zellweger had won the lottery, had been plucked from semi-obscurity by the movie gods (or, actually, by the daring of Cameron Crowe), but not because it was so unusual to see a non-famous actress starring in a major movie. What was unusual, to the point of breaking the rules, was the way that she looked. In 1996, Tom Cruise was still the biggest movie star in the galaxy, and he didn’t make films with just anyone. He worked with costars who reinforced his supernova status, through their fame or their beauty or both. Zellweger, with pillowy cheeks and quizzically pursed lips and that singular squint, was beautiful, but not in the way that a Nicole Kidman or a Julia Roberts was. She was beautiful in the way an ordinary person is (even that name sounded like it hadn’t been to Hollywood yet), in a way that came from outside the Tom Cruise paradigm. And that, in the end, was exactly what the movie was about: Could Cruise, as Jerry Maguire, leave aside his Cruise-control mystique to embrace something real? “You complete me” is one of the great lines in modern romantic movies because of the way it takes its inner meaning from who Renée Zellweger is. This is what completes you: someone who looks just like this. What completes you is reality.

Zellweger was no flash in the pan, but after “Jerry Maguire,” she struggled to find roles that could complete her. It wasn’t until “Bridget Jones’s Diary,” five years later, that she hit her stride by finding a role that jelled with her image as an extraordinary ordinary girl. It may sound like I’m being patronizing, but if you go back and look — I mean really look — at the old Hollywood stars, who we think of as some of the most incandescent people of the 20th century, the truth is that if you forget their iconic status for a moment, a lot of them were highly idiosyncratic-looking. To name two obvious examples: Humphrey Bogart and Edward G. Robinson. But more tellingly, on the actress side of things, just think of Barbara Stanwyck, Joan Fontaine, Bette Davis — radiant sensual goddesses all, but sorry, these weren’t the beauty contest winners. They looked like heightened versions of us.

Today, more than ever, movie stars look like models, and there’s a pressure on them to conform to certain “standards.” The amount of cosmetic surgery that goes on in Hollywood would shock almost anyone who learned about it, because the truth is that a great many stars who don’t look nipped and tucked, and who publicly decry plastic surgery, have had the work done. But that, by definition, is to keep them looking younger, to keep them looking like “themselves.” (That’s why you can’t tell.) The syndrome we’re talking about is far more insidious, because when you see someone who no longer looks like who they are, it’s not necessarily the result of bad cosmetic surgery. It’s the result of a decision, an ideology, a rejection of the self.

The recent flap over Zoe Saldana playing Nina Simone in the dreadful biopic “Nina” was a fully justified imbroglio — not because Saldana herself is anything less than a spectacular actress, but because the truth is that she doesn’t look remotely like Nina Simone, and so the very logic (or illogic) of the casting carried an imprint of racism. It said, implicitly: The people who are financing and making this movie don’t believe that an actress who does look like Nina Simone can sell enough tickets. Simone was beautiful, though in a powerfully unconventional way that doesn’t rise to the fascist standards of the new American beauty. And so what “Nina” did, through the casting of Saldana, was to give Nina Simone plastic surgery in hindsight. The film was so abysmal that its failure to do justice to the majesty of Simone’s artistry was an even bigger insult, but the point is that it reflected the new virus: the cosmetic-ization of reality.

The most toxic thing about “having work done” is the feeling it can create that someone doesn’t look dramatically different from the way they looked before so much as they look…less. Less vivid, less distinctive, less there. You can’t prove it, but you know it when you see it. Our physiognomies express a great deal of who we are (that’s why we’re so hung up about them), and the redemptive comic spirit of the “Bridget Jones” films is the passionate drunk-girl-next-door everydayness of Bridget, the way that she’s no better than any of us — a spirit reflected, at least in the first two movies, in the slightly slovenly doughy-cuddly perfection of Renée Zellweger’s face. Yes, she gained weight for the role, but the added weight was still her. I’m one of the few critics who loved even the second film (the Bridget-goes-to-Thai-prison plot might have seemed absurd, except that Zellweger grounded it), and the third chapter is long overdue. I just hope it turns out to be a movie that stars Renée Zellweger rather than a victim of “Invasion of the Face Snatchers.” I hope it turns out to be a movie about a gloriously ordinary person rather than someone who looks like she no longer wants to be who she is.