‘No Other Love’ Actress Issues Apology to People of China 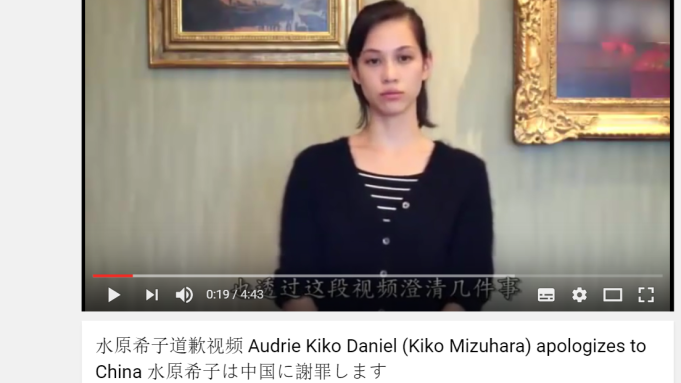 A Korean-American actress, Audrie Kiko Daniel (aka Kiko Mizuhara) has issued a video apology to the people of mainland China. It is the latest in a series of incidents highlighting the growing politicization of the entertainment industry in East Asia.

Mizuhara apologized for allegedly using social media to “like” a photograph in which Chinese artist Ai Weiwei raised his middle finger in Beijing’s Tiananmen Square. She also used her nearly five minutes of English-language mea culpa to deny that she was the person in a photo taken at Tokyo’s Yasukuni Shrine, which commemorates Japanese WWII dead.

It is unclear whether the film, which had begun post-production, will now be reshot with a replacement male lead. And it is unclear whether Mizuhara’s groveling has been enough to satisfy the patriotic forces in the Chinese media, and to let her keep her role.

Taiwan’s Premier Lin Chuan this weekend issued a statement saying actors and actresses should be allowed to perform “without political factors getting in the way.”

Taiwan became self-ruled after the Communist Party took over mainland China in 1949, but cross straits tensions have never ceased. This year, which saw the election of a less pro-China president in Taiwan, and the recent Hague ruling on economic use of the South China Sea, has witnessed a rising tide of intolerance.

In January, Chou Tzu-yu of K-pop group Twice was forced to apologize to the people of (mainland) China by her (Korean) management JYP Entertainment after she was accused of waving a Taiwan flag during a TV show.

Tenky Tin, chairman of the Hong Kong Movie Production Executives Association, said it was inevitable that mainland Chinese rules and ideologies would have to be followed by those who seek to break into the China market.

However, Tin said that the recent events will not help mainland Chinese productions travel abroad. “In general mainland movies don’t appeal to overseas markets, even those in Hong Kong. But this doesn’t seem to be a concern for China,” he said.

Others are dealing with the situation through humor. Some Hong Kong and Taiwanese netizens have used Facebook (which is banned in China) to launch The First Annual Apologies To China Contest.

The South China Morning Post cites contestants posting satirical comments including: “I am sorry that I cannot understand the Chinese democracy. It must be because I am not intelligent enough,” and “Sorry, but my computer does not have a Great Firewall. I can watch BBC, CNN and access Google.”