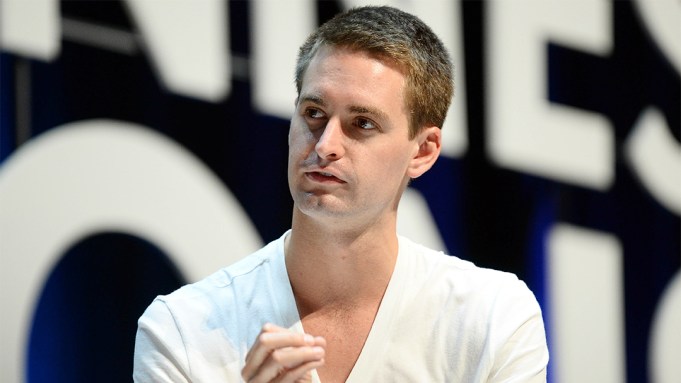 Maybe that third name hasn’t earned the right yet to be uttered in the same breath as the other two icons. But Snapchat’s CEO is making a case for himself one innovation at a time, and his latest one is a true doozy.

Last week’s surprise launch of Spectacles, a $130 set of sunglasses going to market shortly boasting the capability of capturing and sharing video, brings to mind the kind of audacity and ambition that the CEOs of Apple and Facebook infused into their businesses.

Were it not for how unorthodox the product roadmap the 26-year-old Spiegel has been, what he is attempting with Spectacles would seem foolhardy: a company with zero hardware experience boasting a newfangled style of “circular” video is introducing a product into a category scorched by failure and controversy. Oh, and also Snapchat is rebranding as Snap at the same time.

But because this is all coming from Spiegel, he has to be taken seriously.

Perhaps Spectacles shouldn’t be that surprising. As the furious evolution of the Snapchat platform itself has made abundantly clear, Spiegel is the most innovative visionary in tech since Jobs, with whom he shares not just a willingness to defy conventional wisdom, but open distaste for it. Nothing about Snapchat is cookie-cutter, from its emphasis on Spiegel’s first go at another kind of newfangled video–“vertical”–to a user experience that is practically incomprehensible to anyone over 18, which may explain in part why it’s so sticky to a younger, more coveted audience segment.

It’s going to be exciting to see what circular video, which has an expanded camera angle that mimics the aperture of the human eye, is all about.

Spiegel referred to Spectacles as a “toy” a few times in the Wall Street Journal interview in which he unveiled the product, an understatement that evoked Steve Jobs’ famous pooh-poohing of Apple TV as a mere “hobby.” In both cases, you have CEOs deliberately playing down expectations, hedging against the potential for failure when taking fliers.

Spiegel can hedge all he want about Spectacles being a toy, and something that will just be available on a limited basis, but that’s not going to fool anyone who understands the upside Snap could unlock by establishing itself in the device game. If it fails, Spiegel will make this sound like it was just some meaningless side project, but of course it isn’t.

Is it possible that 5-10 years from now that Snapchat will represent only a small piece of what Snap will become as a company? Will Spectacle be the first in a line of products that could redefine Snap as a hardware-first brand? At this early juncture, it sounds almost too far-fetched to comprehend.

Snap’s shift from media to machines brings to mind Zuckerberg’s own aborted flirtation with hardware, when Facebook seriously considered getting into the smartphone business around 2010-2012.

That would have been a far bigger move than Spectacles, but they share a common motive: They’re not about creating just another revenue-generating product extension; they are toeholds toward positioning the company to take greater control of the value chain in which they currently already are a significant part, but don’t own end to end.

It’s way too early for anyone at Apple or Samsung to quake in their boots yet, but privacy is another issue Spectacles where will be sure to raise concerns. Though the video is confined to capturing far less than a minute at a time, and a light on the frames clearly indicates when something is being recorded, there’s a very real prospect Spectacles can evolve–or devolve–into a more powerful product that will be disruptive to say the least.

This is probably something Google didn’t fully understand when its own lenses, Glass, attempted to make its mark on the nascent wearables market just a few years ago. Spectacle is such a daring play for Snapchat because of the crater-sized hole Google left when Glass tanked, a gap yet to be filled by other products.

Glass being stuck in some vague sense of retrenchment ever since sent a clear warning to the marketplace: Wearables is a tough nut to crack. Google failed so dramatically with Glass that it’s little wonder no other tech giant has mustered the nerve to go big here.

But Spiegel has the courage to realize the failure of Glass didn’t mean optic wearables was a dead end for everyone.

Of course, Spectacles doesn’t represent a pivot for Snap, which remains firmly planted in media soil. But it’s worth wondering whether on some level this departure from the core product was a move Spiegel felt Snapchat had to make, one that may have helped better pave the road to where the company is inevitably going: an initial public offering. Is it conceivable that a company as successful as Snapchat felt insecure about having all its eggs in the fragile basket that is the turbulent social media world? Did it need to demonstrate to Wall Street its ability to diversify its product base despite the fact its core product is as phenomenally successful as it is?

Because if Spectacles wasn’t actually something intended to help along the company’s IPO, maybe it would have been better off a post-IPO project. Because if Spectacles fails, it’s a knock against Snap, raising the possibility that for all his success, maybe Spiegel doesn’t have Jobs’ product genius or Zuckerberg’s ability to diversify into other ventures, from Whatsapp to Oculus. Like it or not, Spiegel just put himself to the test.