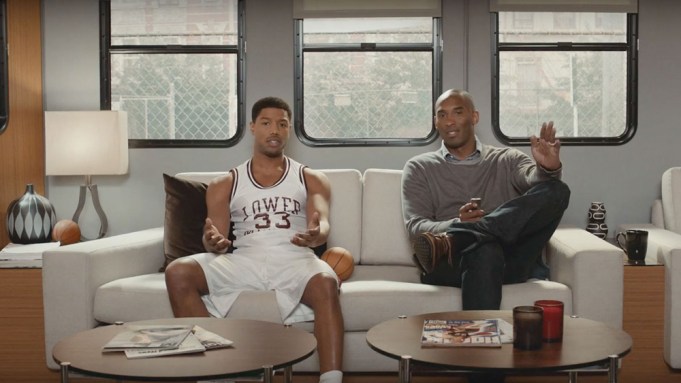 When retiring Los Angeles Lakers star Kobe Bryant bids the NBA farewell Wednesday, chances are more people will see him in a new commercial for Apple TV than the final game itself. Which is a good thing for this basketball legend, who shrewdly uses the spot to satirize his own prickly persona.

But while Bryant comes off great in these commercials, maybe the same can’t be said about Apple TV.

Bryant’s performance opposite Michael B. Jordan is the second celebrity-centric commercial Apple has furnished in support of the upgraded version of the living-room device unveiled last September. “Game of Thrones” star Nikolaj Coster-Waldau and “Community” star Alison Brie are featured in the first one.

Both ads use the same, very Hollywood-ish premise, focusing the action entirely inside a trailer on set at some unspecified fictional production being discussed by each twosome. The Apple TV is being used by the actors in a way that allows them to showcase the device’s ability to use remote-controlled voice command to easily navigate their TV experience.

In the Bryant-Jordan spot, “Father Time,” Jordan talks to Bryant about playing the basketball star in a biopic only to discover they have very different conceptions of his role. While Bryant verbally instructs his Apple TV via its remote to fire up its NBA app to show Jordan footage of himself in his basketball prime, Jordan is so obsessed with portraying the athlete as “old Kobe” that he uses Apple TV to stream “Benjamin Button,” cuing up a specific frame of the film in which the title character looks incredibly old.

Bryant is so offended that he petulantly dismisses Jordan. “Get out of my trailer,” he sniffs.

For “The Kiss” with Brie and Coster-Waldau, they use Apple TV to easily call up scenes of the “Thrones” hunk’s previous work to help them prepare for a romantic scene they’ll be doing together. Again, the focus is on voice control. Coster-Waldau demonstrates Apple TV’s Apple Music feature by calling up a sultry R&B song he sings along to intended to get Brie “in the mood,” which hilariously has the opposite effect.

Both commercials are amusing, but will they accomplish what Apple wants for this device? Keep in mind the company’s goal isn’t as simple as just selling as many units as possible; this is a critical juncture in the life cycle of the product because Apple needs to establish Apple TV’s brand identity.

Bringing in cool celebrities and athletes gives Apple TV the kind of upmarket cool the company wants to project for all of its products. But there’s an additional challenge here these spots could be faulted for falling short on: delivering the wow factor on the device’s functionality.

Apple needs to woo consumers who already have plenty of options when it comes to devices that stream content in their living room, whether that’s rival devices that also have voice-command features like Roku, or the many different smart TVs in the marketplace. If all Apple TV has to sell itself right now is pointing out that consumers will have the ability to speak into a remote control and fast-forward to a particular time, that’s not really much to brag about–nor pay more for than the other options.

Apple TV is still likely to add many more features and apps in the coming months that could significantly add to its capabilities, so going out in the market now when people by and large don’t really have a handle on what the device does and branding it as “the voice-remote” device when that’s not much of a differentiating factor from the competition is not the smartest move Apple could be making with its marketing.

Maybe a company as gargantuan as Apple doesn’t have to sweat an ad or two. But as someone who mastered the fine art of image maintenance, Bryant is just the person who could have warned Apple that perception is everything.