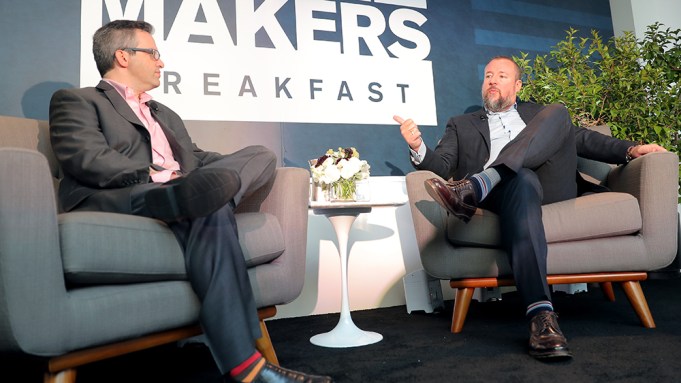 Vice Media has long hinted at a possible IPO. But 2017 may be the year his company finally takes the plunge.

“We’re talking to some banks and we’re getting ready,” Smith said, adding that executives would present the case for an IPO at a scheduled company board meeting in January. “Next year is going to be a banner year and now is the time to do it.”

No final decision has yet been made on a Vice IPO. But Smith was bullish on the prospect, saying the ownership stakes media giants such as Disney and 21st Century Fox have in place compelled the company to take a hard look at its books, beginning the sort of due diligence that an IPO would require. “It’s ironic our partners forced us to go through that process and test the market, because when we went through that process, our actual growth metrics were higher” than had been anticipated, he said.

That hypothetical IPO would take place against a media-business landscape that Smith expects to transform radically in the coming year.

“In the de-stratification of the status quo, you’re seeing companies implode, new companies being made,” he said. “We believe that on the public markets, the vote will be for the future, which would be us, so we need to sort of turn on the jets.” Smith indicated that part of his jet-turning-on plan includes acquisitions — “buy some tech companies, buy some TV companies, distressed media assets, of which there are a lot.”

The Vice chief did not hold back from predicting what 2017 would hold for other media companies as well. Smith — who speaking to reporters at the Edinburgh International Television Festival in August predicted a forthcoming media “bloodbath” — forecast doom for poorly positioned competitors. On the digital media front, he reiterated his prediction that “30% of URLs will go away, just go bankrupt.” On linear television, where Vice is partnered with A+E Networks on the less-than-a-year-old cable channel Viceland, Smith said, “There’s going to be a lot of cable channels that are going to say ‘We’re fucked.’”

He saved his most dire outlook for Viacom, the beleaguered television-film conglomerate that yesterday saw plans for a proposed merger with CBS Corp. evaporate amid family and boardroom drama surrounding Sumner Redstone, whose company National Amusements holds a controlling interest in both CBS and Viacom.

Noting that former Viacom chief Tom Freston sits on Vice’s board of directors, Smith said, “That’s like a Shakespearean tragedy, with Viacom just circling the drain.”

Smith predicted that 2017 would see a series of mergers and acquisitions in media as complementary companies pair off in hopes of better positioning themselves to survive in what he characterized as an increasingly hostile landscape.

That trend, he said, could be fueled by changing political realities following the election of Donald Trump as President of the United States. Apple, in particular, according to Smith, could be headed for a major acquisition.

“If Trump allows companies like Apple to repatriate money, and they say, ‘We have to spend a certain amount here to make jobs and s–t,’ because it’s all about making jobs, then Apple will come back with a butt-pile of money and say, ‘Okay, let’s throw some golden bricks at people.'”

The hit that Apple competitor Samsung took with the massive recall of its Galaxy Note7 phone bought Apple time, according to Smith, but the U.S. tech company is still primed to make a play for a major media acquisition on the scale of AT&T’s bid for Time Warner. “I think they have to,” Smith said of such a move.

Smith also talked about how Trump has impacted the news business, in which Vice, with its digital offerings and new nightly news program on HBO, has become a growing player, targeting the millennials that typically eschew cable news.

“If you look at the greatest tragedies of our time, Iraq, Afghanistan–that sort of built CNN,” Smith said, noting that Vice had long been “the kid brother” in news before gaining recent legitimacy with the HBO deal and an interview special with President Obama. “In a way, Trump is fantastic for our business, because we’re mostly millennial. It’s been incredibly galvanizing for our demo.”

Asked whether he worries about Trump’s apparent aggression toward the news media, insulting particular reporters and outlets and threatening to tighten libel laws, Smith offered that he was not.

Asked about today’s summit between Trump and tech-industry leaders including Tim Cook, Larry Page, Satya Nadella, and Jeff Bezos, Smith said, “I think the tech leaders going to kiss the ring, it’s hard not to, because if you don’t, he’s a vindictive guy.”

Smith also discussed the international growth of Vice, with the company’s content on pace to reach as many as 80 countries by 2018.

As this year’s Dealmakers keynote interview subject, Smith joined an illustrious group of CEOs who have joined the Variety event in recent years, including Disney’s Bob Iger, CBS’ Leslie Moonves and The Chernin Group’s Peter Chernin.