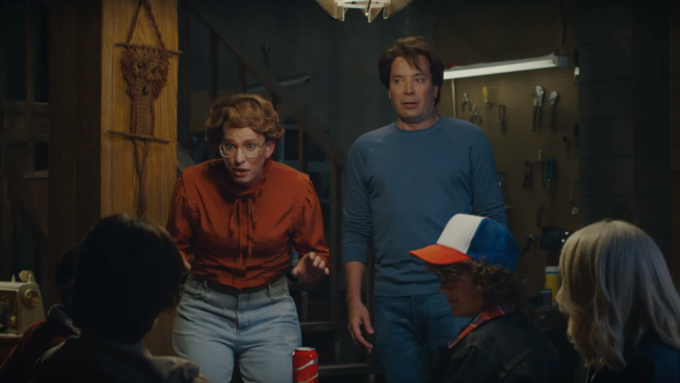 Barb is back from the Upside Down and she is not happy.

In a “Stranger Things” “deleted scene” that aired on “The Tonight Show Starring Jimmy Fallon” Wednesday night, the show’s head writer A.D. Miles tossed on the wig, the glasses and the high-waisted mom jeans, and went absolutely berserk on the other kids.

Millie Bobby Brown, Gaten Matarazzo, Finn Wolfhard and Caleb McLaughlin are sitting around a table in character, playing Dungeons and Dragons when Jimmy Fallon enters dressed as Steve Harrington and summons the wrath of Barb.

Since “Stranger Things” debuted on Netflix, fans have been very vocal about feeling like Barb (Shannon Purser) was done dirty. She mysteriously disappeared a few episodes into the show, but was seemingly forgotten by most of the characters who only seemed intent on saving Will Byers (Noah Schnapp).

“Let’s review, shall we? There were two people down there, and you rescued one of them,” Barb says holding up one finger (the middle one). “Do the math, a—holes.”

The rest of the kids try to make excuses for why they left her behind, but Barb’s not having any of it.

“No search party for Barb! No fake corpse stuffed with cotton for Barb!”

Mid-rant Barb coughs up a piece of slime.

While Barb probably won’t receive this sort of monologue in the actual series, “Stranger Things” is officially coming back for Season 2 in 2017.