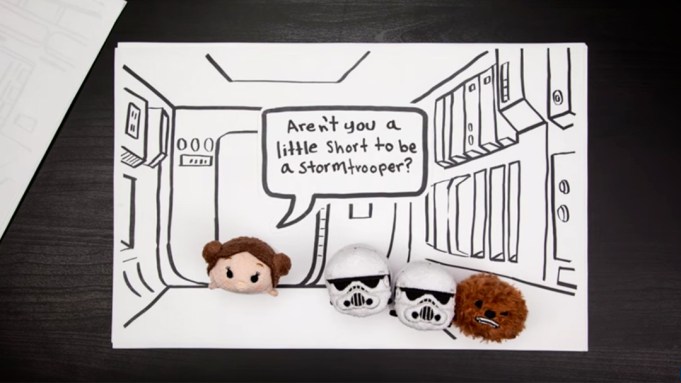 Disney, in an unabashed blending of content and commerce, released a video short retelling the original “Star Wars” movie with characters from its line of huge-headed Tsum Tsum collectible plushies.

In the video, the roly-poly versions of Han Solo, Princess Leia, Luke Skywalker, Chewbacca, C-3PO, R2-D2, Darth Vader and the Stormtroopers star in an abridged, cutesy homage to the 1977 classic.

The video is aimed at pushing “Star Wars” buffs to the cash register to buy their own plush dolls, as well as promoting the space-epic brand overall (as if it needs the help). The Mouse House on Feb. 16 launched the “Star Wars” Tsum Tsum collection, available exclusively at Disney Store locations – both in-store and online – in the U.S., Japan and Europe.

In 2015 U.S. sales of “Star Wars”-related toys topped $700 million, according to research firm NPD Group. That made it the top toy franchise for the year, delivering more sales and contributing more growth to the sector than “Jurassic World,” “Minions” and “Avengers” combined.

Disney first launched the Tsum Tsum toys (from the Japanese word for “stack”) in Japan in 2013. The company says it has become one of the most successful plush lines in Disney Store history.

The “Star Wars” Tsum Tsum video is part of Disney Interactive’s “As Told By” series, which has included emoji-based renditions of “Frozen,” “Aladdin” and “Tangled.”