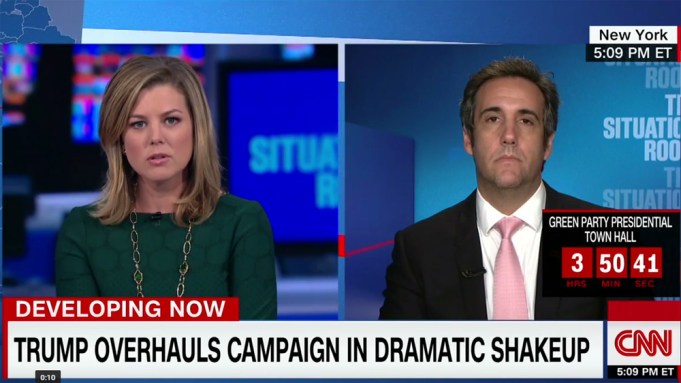 Lawyer Michael D. Cohen, supporter of the Donald Trump campaign and attorney for the Trump organization, asked the question now being heard around the world: “Says who?”

Cohen appeared on CNN Wednesday with anchor Brianna Keilar to discuss Trump’s flopping poll numbers. Keilar began to speak, saying, “You say it’s not a shakeup, but you guys are down…” when Cohen interrupted harshly by asking, “Says who?”

Keilar responded, “Polls. Most of them. All of them.”

Cohen, who was visibly shaken, remained silent for a few seconds before Keilar attempted to regain composure of the interview. He again berated Keilar by asking, “Which polls?” to which Keilar, again, replied flatly, “All of them.”

"Beyoncé had one of the best videos of all time."
"Says who?"
"Polls. Most of them. All of them."

Later in the interview, Cohen said, “My statement to you is that I don’t care about those poll numbers.” Considering Trump’s recent slip in the polls, maybe he should care.