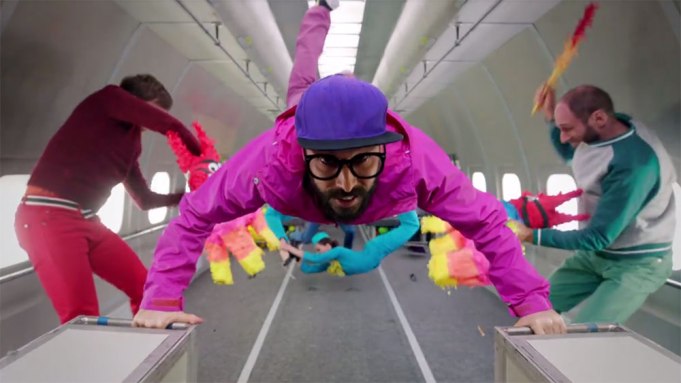 In line with the group’s innovative music video style, OK Go’s new vid for “Upside Down & Inside Out” was filmed entirely in zero gravity.

The alternative rock band’s latest video, which was directed by OK Go frontman Damian Kulash and Trish Sie, features the airborne bandmates tumbling through an airplane cabin, sans wires or green screens. The scene quickly becomes chaotic with acrobatic stewardesses, suitcases full of colored bouncy balls and vibrant pinatas. The airplane setting was made possible by collaboration with S7, a Russian airline.

Sie — who helped choreograph the treadmill routine for OK Go’s Grammy-winning viral music video “Here it Goes Again” — revealed to RedBull.com that the inspiration for the band’s latest video arose from a 2012 experience with NASA’s “Vomit Comet” exhibit.

“We were excited to have the zero-g experience, of course, but we also wanted to see if there was music video potential there,” said Sie, who is also Kulash’s sister.

The biggest challenge in creating a music video of this caliber, Sie and Kulash said, was shooting an entire choreographed routine rather than an edited montage.

“What we didn’t want to do was a bunch of cool stuff and edit it together later,” Kulash said. “It’s very much not our style, like where’s the challenge?”

To do this, they had to slow down the playback of the song and develop a logistical filming system.

“We also came up with a system for doing a single take over eight parabolas. In each flight you have 15 parabolas and in each parabola you have 20 seconds of double gravity, then 50 seconds of weightlessness and few minutes of setting it all up again. So to make it one take, we took eight of these in a row over 40-45 minutes,” Kulash explained.

Watch the full “Upside Down & Inside Out” video above.