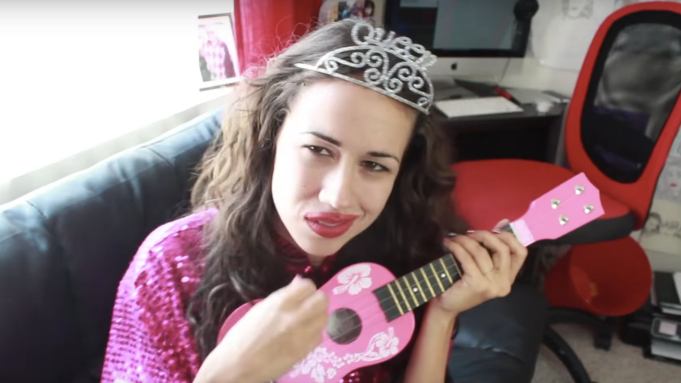 Miranda Sings, the oddly untalented self-described YouTube singer-dancer-actor-model-magician, announced in a music video that her series “Haters Back Off” will debut Oct. 14 on Netflix worldwide.

The eight-episode half-hour show covers Miranda’s backstory of her life with her mom and uncle growing up in Tacoma, Wash., before she became famous on YouTube for her lack of singing skills and excessive use of lipstick (or “lisstick,” as Miranda calls it).

Miranda Sings, who appears on the cover of this week’s issue of Variety, is played by classically trained singer Colleen Ballinger. The character currently has more than 6.5 million subscribers on her YouTube channel, which Ballinger originally launched as a joke for her friends. “Haters Back Off” co-stars Angela Kinsey (“The Office”) as her mother and Steve Little (a Groundlings member whose credits include “Eastbound and Down” and “The Grinder”) as her uncle, Jim.

The premiere date announcement was timed for VidCon, the online-video convention being held this week in Anaheim, Calif., where Miranda was scheduled to hold a Q&A session Friday afternoon.

“Haters Back Off” is Netflix’s second big originals bet on a digital star. Earlier this week, Netflix announced a deal for an unscripted series with Cameron Dallas that will offer a look into his personal life as the social-media star who rose to fame on Vine seeks to advance his career.

The Miranda Sings show, named for her signature catchphrase, was developed for TV by Colleen Ballinger and her brother, Chris Ballinger, along with showrunners Perry Rein and Gigi McCreery. Executive Producers are Colleen Ballinger, Christopher Ballinger, Perry Rein, Gigi McCreery, and the Firm’s Jeff Kwatinetz and Josh Barry. Produced by Brightlight Pictures for Netflix, it was filmed in April and May in Vancouver, as a stand-in for Miranda’s hometown of Tacoma.

Netflix gave “Haters Back Off” a straight-to-series order, beating out HBO, which had offered a pilot commitment, according to industry sources.