Continue to Variety SKIP AD
You will be redirected back to your article in seconds
Jul 15, 2016 1:01pm PT 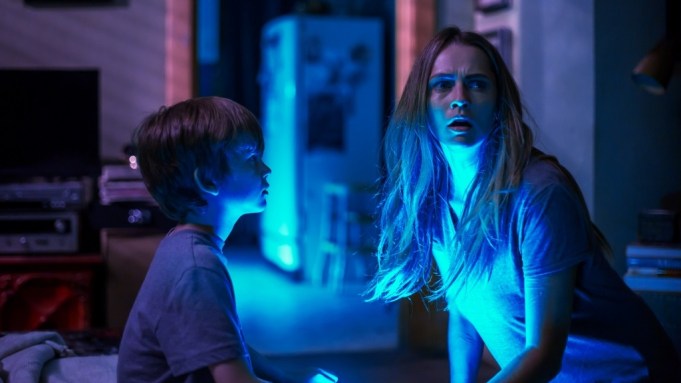 David F. Sandberg’s feature-length directorial debut, “Lights Out,” is set to bow next week — and Warner Bros. is using his YouTube-to-bigscreen success story to market the horror film.

The studio pacted with YouTube to invite eight up-and-coming creators to shoot scary short films at YouTube Space New York, on new sets inspired by the “Lights Out” movie. The videos are slated to go live Friday, one week ahead of the July 22 debut of “Lights Out,” a New Line Cinema presentation distributed by Warner Bros. The shorts will appear on the individual creator channels, as well as the YouTube Space channel, the official Warner Bros. YouTube channel and promoted through social media platforms.

“It’s a Cinderella story born at YouTube,” said Blair Rich, president of worldwide marketing for Warner Bros. “So it seemed like the most natural place to promote the movie was with YouTube.”

In 2013, for a short-film competition, Sandberg posted the 2 minute, 41 second “Lights Out” short starring his wife, Lotta Losten, on YouTube, which he shot in their apartment in Gothenburg, Sweden, on sets built from Ikea. It went viral, and eventually caught the attention of Lawrence Grey, who brought it to WB and attached James Wan (“The Conjuring”) as producer. Sandberg is now in the middle of directing “Annabelle 2” for the studio.

The eight YouTubers who created shorts for the “Lights Out” campaign, produced over two weeks earlier this summer, are: BlackBoxTV‘s Tony E. Valenzuela, AntoSharp (U.K.), La Cosa Cine (Argentina), Luisito Communica (Mexico), Brothers Riedell, Miracles of Modern Science, Kenzie Nimmo and 5 Second Films. The directive was to play off the theme of “What are you afraid of?”

As part of paying back to the YouTube community, Sandberg and Losten met with the group and other aspiring filmmakers at YouTube Space NY to provide guidance on their projects. Their main advice: don’t give up on your projects.

“I told them, ‘Keep making stuff and putting it out there.’ You have no idea what will resonate with people. You keep learning every time you create,” he said. “Something I’ve struggled with is, halfway through, I want to quit – because I think it’s shit. That was true for the ‘Lights Out’ feature, but you have to power through and finish it.”

The movie centers on Rebecca (Teresa Palmer), who grew up never really sure of what was and wasn’t real when the lights went out — and now her little brother, Martin (Gabriel Bateman), is experiencing the same kinds of unexplained and terrifying events.

At YouTube Space NY, the Internet video company created two sets in the style of “Lights Out,” one for Rebecca’s bedroom (below) and one for the house’s basement, in collaboration with Warner Bros. and Sandberg.

“It was so inspiring to fill a sound stage at YouTube with all these creative young people,” said Rich. “It’s interactive marketing in a way we’ve never done before.”

According to the companies, no money changed hands in the deal, and it wasn’t predicated on Warner Bros. buying advertising on the site for the film. YouTube’s interest in the project was to promote the resources it provides at YouTube Spaces and give some of its best homegrown talent a crack at creating something new — and not necessarily in their wheelhouse.

“We want our creators to engage with these intellectual properties, to test new formats, stretch their narrative legs and experiment in different ways,” said Chris D’Angelo, director of programming for YouTube Spaces.

One of the YouTubers who participated was Kenzie Nimmo, who runs her channel mostly about music and songwriting with her husband, Harris Heller. The Salt Lake City, Utah-based couple got involved in the project through Fullscreen, their multichannel network partner. Nimmo said the “Lights Out” opportunity fit into a video she was already thinking about making in response to fans who had been asking about how to overcome fears. “Chasing your dreams is a scary thing,” she said. “Something can be scary because of social anxieties — that’s the angle I took.”