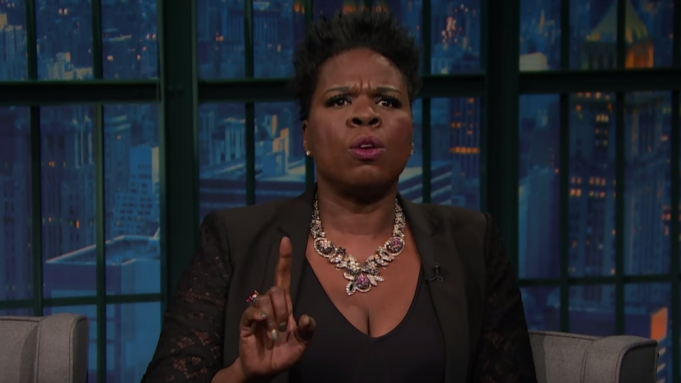 Leslie Jones is back on Twitter, but not done speaking up about her trolls.

The comedian and actress talked to Seth Meyers on “Late Night” Thursday night about receiving countless racist comments from trolls on twitter.

On Monday, she spent all day retweeting hateful and racist tweets she received since “Ghostbusters” opened, and that night she tweeted that she would “leave Twitter tonight with tears and a very sad heart.”

I leave Twitter tonight with tears and a very sad heart.All this cause I did a movie.You can hate the movie but the shit I got today…wrong

Now Jones is back — she reactivated her account on Thursday — and wants to clarify: “I didn’t leave,” she told Meyers. “I just signed out because I wanted to deal with what was going on.”

She went on to explain more about the situation.

“What’s scary about the whole thing is that the insults didn’t hurt me. Unfortunately I’m used to the insults,” she qualified. “What scared me was the injustice of a gang of people jumping against you for such a sick cause.”

“It’s so gross and mean and unnecessary,” she said.

Jones added that she felt if she didn’t retweet the abusive messages, the problem would never have been addressed. “If I hadn’t said anything, nobody would have ever known about this. All those people would still have an account.”

Jones said that she ended up meeting with Twitter CEO Jack Dorsey, and effectively deactivated many of the accounts that send her hateful messages. Meyers closed out the segment by showing a video compilation of positive support for Jones.

The actress also addressed feedback that she was trying to hamper free speech. Her response: “Hate speech and freedom speech: two different things.”