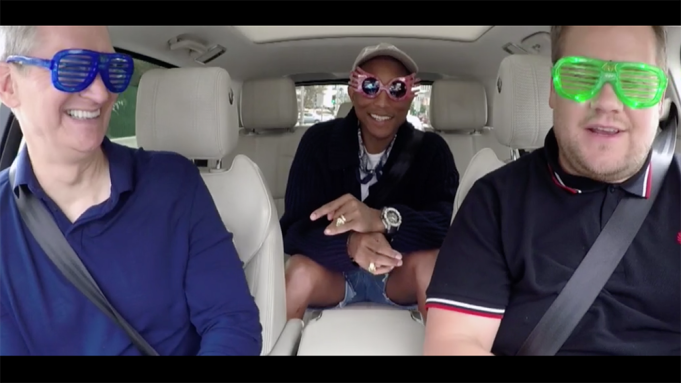 As part of the iPhone 7 announcement production on Wednesday, Apple CEO Tim Cook joined “The Late Late Show’s” James Corden for a quick round of Carpool Karaoke.

The segment stars with Corden asking if Cook can share any insider information before the official announcement.

“We’re going to talk about some great stuff,” Cook says.

“That just sounds like a press release,” Corden replies.

Corden gave Cook a pep talk before he took the stage to reveal the new iPhone 7 which, among other features, will be water-proof and no longer includes a headphone jack.

The “Late Late Show” host also suggested, jokingly, that Cook should appear on stage carrying a cane “with the Apple logo on the top.”

“This is a big deal,” Corden said. “If I was you, I’d be wearing a suit made entirely of apples.”

When asked about his favorite band, Cook replied that he “love[s] One Republic.” Both Cook and Corden engaged in renditions of One Republic’s “I Lived,” followed by Lynyrd Skynyrd’s “Sweet Home Alabama” with a special guest appearance by Pharrell Williams.

Earlier this year, Apple Music announced that it had purchased the rights to a stand-alone “Carpool Karaoke” series. With a 16 episode order, Apple will distribute the series to its members in 100 countries across the globe. The series is set to premiere in early 2017.