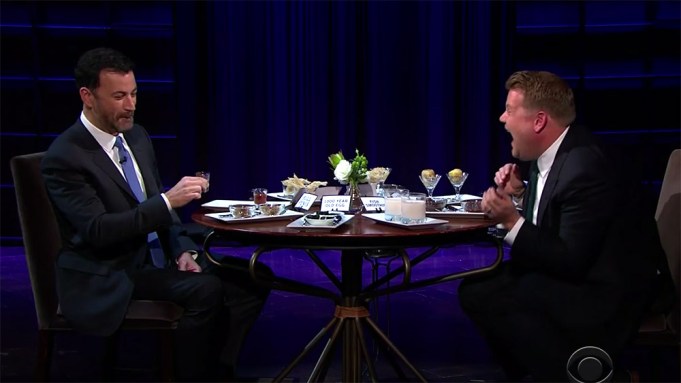 “Fear Factor” met Late Night on Thursday as Jimmy Kimmel and James Corden faced off against one another during a segment called “Spill Your Guts or Fill Your Guts” on Corden’s “Late Late Show.”

Kimmel, who will host the Emmys on Sunday, sat down with Corden at a revolving table filled with repulsive menu items labeled things like “Pig Blood Curd,” “Fish Smoothie” and “Balut” (Google it… actually, don’t).

“Wow, it all looks so terrible,” Kimmel said. “I know people can’t smell it, but it doesn’t smell good either. This “Fish Smoothie” smells like being at the beach.”

The rules of the game? Answer an intensely personal and probably embarrassing question, or eat something gross.

Before Corden can even ask his first question, Kimmel devours the “Pig Blood Curd.”

Corden asks him which Late Night host is his least favorite, Kimmel takes a sip of the “Ghost Pepper Hot Sauce.”

The segment devolves into hilarity with Kimmel asking Corden “Were you as miserable doing Carpool Karaoke with Britney Spears as it looked like you were?” (which is really more of shady question than a difficult one.) Later, Corden fires back, “To the nearest million, how much do you make a year?”

For the last question, Kimmel asks Corden to name two of the camera men in this room.