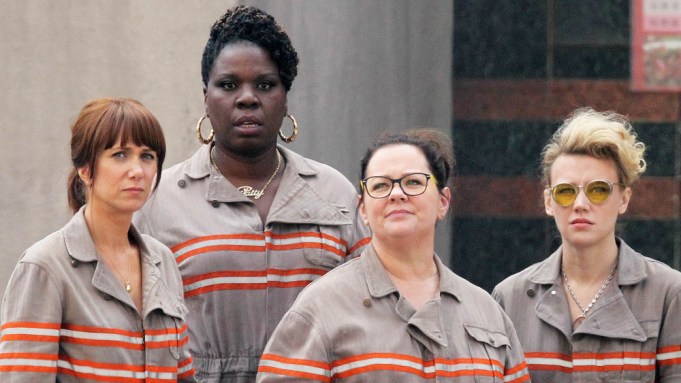 Who ya gonna view?

The “Ghostbusters” trailer racked up more than 24 million views across YouTube and Facebook in the 24 hours after it debuted online to mixed reactions, according to data from ListenFirst Media.

The all-female reboot has weathered polarized reactions since going into production, but the numbers indicate that interest in the film is greater than the disgruntled, sexist fanboys might suggest.

“Ghostbusters” topped both “Independence Day: Resurgence” and “The Legend of Tarzan” in opening-day trailer views, with “Resurgence” racking up about 12 million and “Tarzan” topping 8 million views.

The ectoplasm-fighting females were no match for superhero fare, however. “Suicide Squad,” “Batman v Superman: Dawn of Justice” and “Captain America: Civil War” all outdid the ‘Busters, with “Squad” topping 34 million views in its first 24 hours, “Justice” behind it with 30 million views and “Cap” with 26 million.

Paul Feig directs Kristen Wiig, Melissa McCarthy, Kate McKinnon and Leslie Jones in the Ivan Reitman-produced supernatural comedy, which bows July 15. The topliners were surprised that news of the reboot was met with widespread negativity.

“The fact there was so much controversy because we were women was surprising to me,” Wiig said last year. “Some people said some really not nice things about the fact that there were women. It didn’t make me mad, it just really bummed me out. We’re really honoring those movies.”

Paul Feig, who is directing the movie, was equally stunned by the comments he was hearing about the movie. “The amount of vitriol did surprise me,” the director said to Variety of the social-media response. “Some of the most vile, misogynistic sh-t I’ve ever seen my life.”