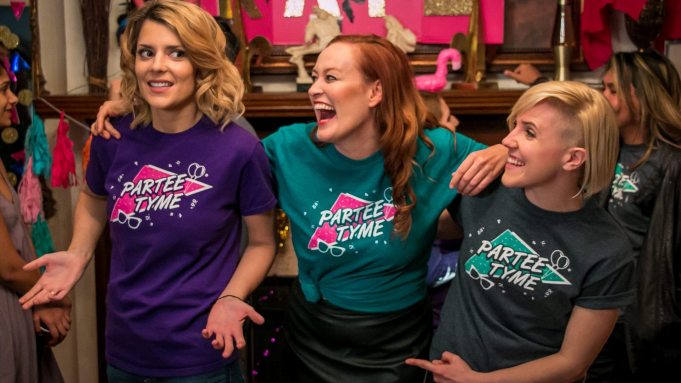 The crew from “Camp Takota” — YouTube stars Mamrie Hart, Grace Helbig and Hannah Hart — are back in feature-length comedy “Dirty 30” from Lionsgate, slated to hit theaters, HD digital outlets and DVD in September.

The announcement was timed for 2016 VidCon in Anaheim, Calif., where the film’s three stars are slated to appear on a panel and preview the trailer. Mamrie Hart, Grace Helbig and Hannah Hart toplined 2014 digital hit, “Camp Takota,” which touched off a wave of digital-influencer-led films and a growing number of TV shows. “Dirty 30” is produced by Michael Goldfine, who also was behind “Takota.”

In the film, the three amigas play lifelong friends stuck in a rut. Kate (Mamrie Hart) is trapped in a middling job and endures a string of failed dates, while married Evie (Helbig) has in-laws from hell and Charlie (Hannah Hart) has the girl of her dreams but can’t seem to pull her business (or her act) together. On the eve of Kate’s 30th birthday, she agrees to let Evie and Charlie throw her a party — but the shindig unexpectedly spirals into chaos as personalities past and present collide.

As with other movies featuring digital stars, Lionsgate is banking on the social reach of the talent to spur fans to buy movie tickets, digital downloads or DVDs. Helbig, Hart and Hart have a combined following of more than 5.5 million followers on YouTube, 4 million on Instagram and 2.5 million followers on Twitter. (Mamrie and Hannah are unrelated.) The three also have each published books, and are backers of food-app startup Dysh.

“Dirty 30” is directed by Andrew Bush (“Roller Town”), with a screenplay by Mamrie Hart and Molly Prather and story by Mamrie Hart and Grace Helbig. The film is produced by Michael Goldfine (who briefly served as Fullscreen’s chief content officer) and executive produced by Grace Helbig, Mamrie Hart, Hannah Hart, Mark Shapiro, Will Staeger, Michael Antinoro, Ken Treusch, and Vincent Nastri. The Lionsgate-distributed movie is presented in association with IMG. The film (whose title was previously styled “Dirty Thirty”) is not yet rated.