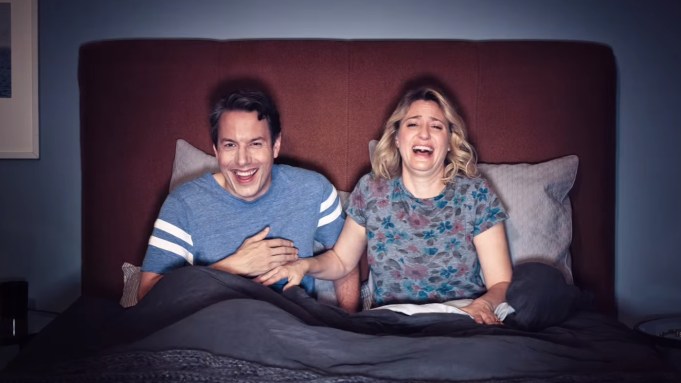 Comcast has made a TV comedy about watching TV — which is in fact one big promo for its cable TV service.

The cable operator has launched “Glued,” a six-episode short-form series about a married couple whose relationship evolves as they get hooked on a hit TV show. The point of the show is to highlight the benefits of Comcast’s Xfinity On Demand, which offers some 85,000 selections including current-season TV shows and movies.

The show was created with advertising agency Droga5 in partnership with Merman X Pulse, a branded-content production joint venture between Pulse Films and Merman.

“There are so many stories around the way we watch television, and we had so much fun telling them,” Horgan said in a statement. “We didn’t have to stretch very far beyond our own real lives. It all felt so fresh, and clever, and real, which is what I really responded to.”

The first four episodes of “Glued” are now available on the Xfinity YouTube channel, Comcast’s Watchable.com and Xfinity On Demand, with the final two scheduled for release June 30. Each ranges from three to five minutes in length and each focuses on a different TV-watching behavior, such as setting viewing rules with your spouse and developing new parenting techniques to facilitate binge-watching.

Comcast is promoting the series with digital and social media campaigns, including 15-second cut-downs, a show trailer and customized GIFs across brand-owned and paid channels. For now, “Glued” is a one-off, with no additional Xfinity-themed original series in the works.