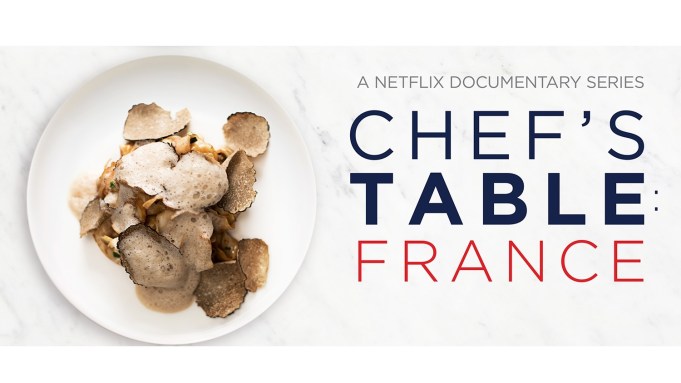 Netflix has released the trailer for the next installment of “Chef’s Table,” and the third season of David Gelb’s docu-series about culinary artists takes a distinctly Francophile turn.

Creator David Gelb noted that while the first two seasons of “Chef’s Table” included some subjects originally from France, the show had not actually traveled to the country before. “French cuisine is so important artistically and historically,” Gelb said. “We have four chefs at different places in their careers and lives, and we got a beautiful cross-section of French cuisine.”

With Passard, for example, “Chef’s Table: France” explores how the famous Parisian chef decided to remove meat from the menu of his three-star restaurant and serve all vegetable dishes, which was a shocking move in the food world. “It’s all about the character’s journey,” said Gelb, who previously directed acclaimed documentary film “Jiro Dreams of Sushi” (the inspiration for “Chef’s Table”).

Gelb said he shopped “Chef’s Table” to a variety of TV networks, which passed: He was told that the format wouldn’t work because it didn’t have a host and it wasn’t a cooking-competition show. “Netflix saw the merit of it. They really appreciated what we did with ‘Jiro,'” Gelb said. “Nobody else wanted this show. I don’t know if this show would exist without Netflix having the courage to produce this.”

“Chef’s Table: France” was shot in France from September to November 2015, with the crew shooting with each chef for 10-14 days. “I’m a documentary filmmaker,” Gelb said. “It took some work for us to adapt to a TV schedule.”

Gelb and his team are currently in post-production on season 4 of “Chef’s Table,” which will premiere in 2017. That will feature six chefs, including Ivan Orkin of Ivan Ramen (U.S./Japan), Jeong Kwan of Chunjinam Hermitage, Baekyangsa Temple (South Korea), and Nancy Silverton of Mozza (U.S.).