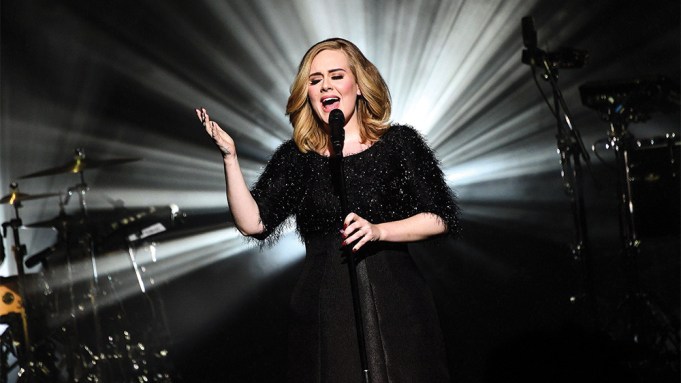 ‘Adele Carpool Karaoke‘ racked up more than 42 million views in it first five days on YouTube, making the “Late Late Show with James Corden” clip the most viral video any late-night TV show has produced since 2013.

That makes the video the fastest grower in the category since “Jimmy Kimmel Live” debuted the trailer for “Captain America” last November, garnering just 31 million views in its first week by way of comparison.

While Justin Bieber’s version of ‘Carpool Karaoke” is still the record holder in terms of lifetime views with 52 million, Adele doubled what Bieber managed in its first week. Her clip also got an additional 3.5 million views on Facebook.

Relative to the other Late Night kings, the Adele clip already ranks among the top 10 most viewed late night videos of the past year. Adele also performed her hit, “Hello,” on “The Tonight Show with Jimmy Fallon,” which reached over 28 million views to date.

Elsewhere on the leaderboard, Freeform, the cable channel previously ABC Family, launched its new brand this week, amid the winter premiere of “Pretty Little Liars” and the series premiere of “Shadowhunters.” Both “PLL” and “Shadowhunters” ranked among the ten most engaging cable programs this week, with “PLL” garnering more than 5 million Instagram engagements the day of its premiere–more than any other program has garnered in a single day over the past year.

“Shadowhunters” made its debut on the cable leaderboard, after generating more than 2.7 million engagements throughout the week. More than 41% of the new series’ engagement stemmed from Instagram, with the program ranking as the fourth most engaging on Instagram for the week, tracking behind well established brands: “PLL,” “Teen Wolf” and “The Walking Dead.”

Provided by ListenFirst Media, DAR – TV measures what entertainment content is resonating most across Facebook, Google+, Instagram, Tumblr, YouTube and Wikipedia combined. For more on the methodology behind DAR – TV, scroll to the bottom of the article.

Jason Klein is the Co-Founder and Co-CEO of ListenFirst Media, a data and analytics company providing insights for brands. ListenFirst aggregates data streams from a wide range of digital, social, and traditional marketing sources to help brands optimize business performance.

Organic conversation volume is calculated based on the use of official hashtags, as well as those hashtags submitted directly from programmers and distributors. Only hashtags where conversation can be isolated to a specific television program are included in the rating.

The Variety weekly leaderboards for television represent the 7-day (Monday – Sunday) sum total of DAR – TV for all episodic programming, in and out of season, from the most popular programmers (Broadcast, Cable, & Streaming Services). Sports, live events, short-form content and other non-episodic programming are excluded from this ranking cohort but available to be rated directly by ListenFirst Media.

The Trending Leaderboard surfaces the three programs that tracked the largest relative growth in DAR – TV (from the previous 7-day measurement period), and are also in the top 25% based on absolute DAR – TV, from across the programming universe.

ListenFirst monitors the official digital account owned by the program on each aforementioned platform (except for Wikipedia, where the title-specific profile is considered official). Only the U.S. version of a program’s digital presence is monitored; for platforms that support regional profiles like Facebook, the “Global” profile is considered the U.S. profile. Only profiles that can be attributed to the specific program contribute to the rating (i.e. engagements that happen on the profile facebook.com/LouieFX are tracked, while engagements that happen on facebook.com/FX are not). For YouTube, in addition to any program-specific presence, content related to the program in question that originated on the parent company’s official YouTube channel is considered.

Note: Twitter data has been removed from Digital Audience Ratings (DAR) for Television as of 10/7/2014.

For other questions pertaining to methodology, contact ListenFirst Media.