Jeremy Clarkson, Richard Hammond, James May will launch new show in the fall 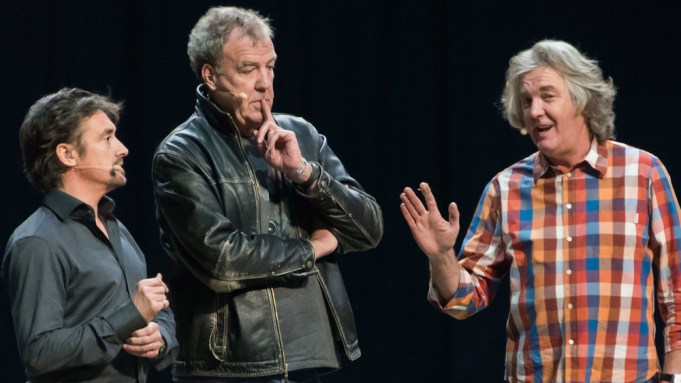 Former “Top Gear” hosts Jeremy Clarkson, Richard Hammond and James May have revealed that their new show for Amazon Prime will be titled “The Grand Tour.”

Not only will the pre-recorded films in the show be shot in a range of locations, but the studio audience recordings will also take place at a different location around the world every week. These pre-recorded studio sections will be filmed in front of a live audience, housed in a giant tent. “The Grand Tour” will launch in the fall.

“Well, that took a while…,” said Jay Marine, VP of Amazon Video Europe. “After nine months of deep thought, debate and deliberation, the guys have come up with a name that reflects the global ambition of the new show. ‘The Grand Tour’ will be one of the most anticipated TV launches ever, and we’re excited to be bringing it to Amazon Prime customers around the world this autumn.”

The new travelling format means Amazon customers around the world will have the chance to be in the audience when tickets are released through prize draws this summer. Details of the location schedule and information on how to apply for tickets will be announced shortly.

Amazon announced in 2015 that Clarkson, Hammond and May would reunite to make a new car show available for Amazon Prime members. The show is produced by the trio’s long-time executive producer Andy Wilman.

Meanwhile, BBC America has announced the premiere date for the revamped version of “Top Gear,” which will be hosted by British TV personality Chris Evans and “Friends” alum Matt LeBlanc. The new series will premiere on Monday, May 30 at 9 p.m. on the cable network.