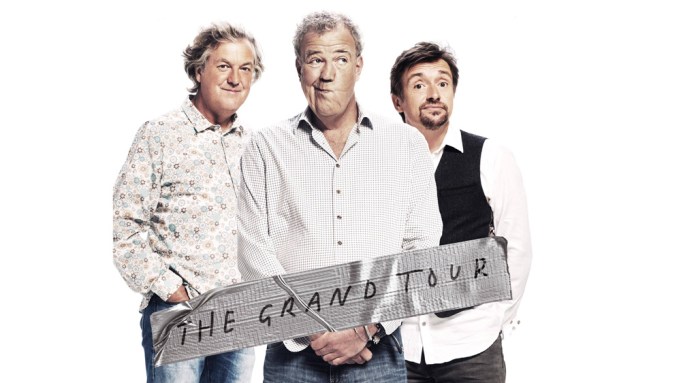 Amazon has revealed the launch date of its keenly anticipated auto series “The Grand Tour,” hosted by former “Top Gear” trio Jeremy Clarkson, Richard Hammond and James May. New episodes will be released weekly, every Friday, from Nov. 18 on its streaming platform Amazon Prime Video.

The first episode will feature a giant traveling tent that acts as the show’s studio throughout the series, which will be located for that episode in California. The studio sequence is being filmed in front of a live audience later this month. In the first episode, Clarkson, Hammond and May will compare three of the latest hybrid hypercars: the Ferrari LaFerrari, McLaren P1 and Porsche 918 Spyder. Matt Damon and Charlize Theron are among the show’s guests in Season 1, according to a report in The Sun newspaper.

“Customers have been desperate to find out when they can watch their favorite team back on screen, so we are very excited to announce the launch date of one of the most globally anticipated shows of 2016,” said Jay Marine, VP of Amazon Prime Video EU. “The guys have been having a blast filming the show around the world, and we can’t wait for fans to see it.”

Clarkson, Hammond and May have committed to three seasons of “The Grand Tour” as part of a landmark global TV deal, and for the past year the team has been traveling the world filming the first season. As well as California, the traveling tent has been to Johannesburg; more worldwide  locations will be announced soon.

Prime members can watch the show via the Amazon Video app on smart TVs, streaming media players — including FireTV and FireTV Stick — Xbox, PlayStation, Wii, Wii U, on iOS and Android phones and tablets, and on the web.