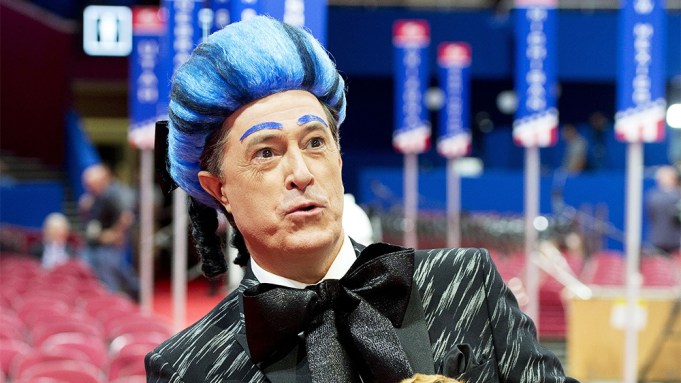 “Late Show” host Stephen Colbert brought out his “Hunger Games” gear again for another round of GOP mockery on Sunday.

Colbert took the mic during the last day of preparation for the Republican National Convention in Cleveland, dressed as Caesar Flickerman, the colorful emcee of the “Hunger Games” movie franchise, and took a few jabs at presumptive GOP presidential nominee Donald Trump.

“He has formed an alliance with Indiana governor Mike Pence,” he said before apologizing for blacking “out for a moment.”

“So it is my honor to hereby launch and begin the 2016 Republican Hungry for Power Games,” Colbert continued, banging his gavel dramatically as a staff member dragged him from the podium.

But, the “Late Show” host wasn’t done just yet.

“Look, I know I’m not supposed to be up here, but let’s be honest, neither is Donald Trump,” he slipped in before completely being thrown off stage.

A few individuals in the audience even acknowledged him with applause. Colbert started taking jabs at the GOP as Caesar Flickerman last year as the Republican party was narrowing down its list of nominees.

“This vicious battle for survival in a cutthroat arena reminds me of ‘The Hunger Games,’ in that hundreds of millions of dollars will be spent and in four years, there’s going to be another one,” he said in a segment last September.

The RNC convention kicks off on Monday.