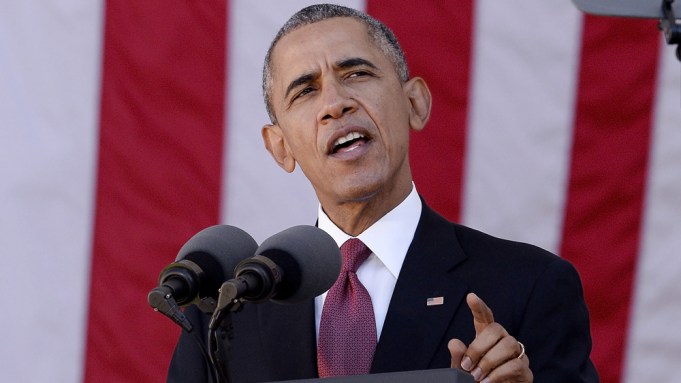 President Obama continued his push for gun reform at a CNN town hall on Thursday, spending a great deal of time defending his measures as “common sense” measures and not a “conspiracy” that “we are creating a plot to take everybody’s guns.”

The event at George Mason University was organized by CNN and moderated by Anderson Cooper. The National Rifle Assn., which has been particularly critical of Obama’s plans to take a series of executive actions on background checks and other measures, declined an invitation to attend, although there were gun rights advocates present.

Obama said that the NRA had also been invited to the White House on certain occasions, but they declined. He said that his position had been “consistently mischaracterized” by the gun lobby and others.

“I’m happy to talk with them…but the conversation has to be based in facts and truth,” he said. In a New York Times op ed that was posted on Thursday evening, Obama wrote that he would only campaign for candidates who support “common sense” gun reform.

He belittled claims that he was out to take away people’s guns, noting that he was in the final year of his term. “When will I have started on this enterprise” to confiscate guns? he said. He called it an “imaginary fiction.”

Instead, he noted how he respected the Second Amendment and the traditions of gun ownership, particularly in rural areas where firearms are vital for protection.

Still, questions were raised on the effectiveness of his proposals, which include an executive order clarifying the definition of who is in the business of selling guns and therefore subject to licensing and to performing background checks on gun buyers.

Among those asking questions was Taya Kyle, widow of Chris Kyle, whose story was depicted in last year’s “American Sniper.” She expressed skepticism of Obama’s gun measures, and noted that the focus on firearm violence was coming as many parts of the country were experiencing all-time low murder rates.

Obama acknowledged the decline in violent crime, but he challenged the notion that it was because of higher gun ownership.

Another woman, a rape victim, shared concerns that stricter gun measures would make it more difficult for her to defend herself.

“There’s nothing that we’ve proposed that would make it harder for you to purchase a firearm,” Obama said.

The forum was largely free of heated rhetoric, which was one of the intents in bringing multiple points of view together in the same room.

Others came to Obama’s defense, including Mark Kelly, the husband of former Rep. Gabby Giffords (D-Arizona), who was shot in the head during a mass shooting in Tucson five years ago. She stood by him as he noted the futility of the task of even trying to confiscate the 350 million guns believed to be in circulation in the country.

Another speaker in the audience was Father Michael Pfleger, a priest in inner-city Chicago, who said that “it is easier to get a gun in my neighborhood than it is to get a computer.”

“I don’t understand why we can’t [get a title] for guns just like cars,” he said.

As the president watched, CNN also replayed an excerpt of Obama’s speech at the White House on Tuesday, when he cried as he recalled visiting the families of the victims of the 2012 Newtown, Conn. massacre.

At the town hall, Obama said that his Newtown trip “was the only time I have seen the Secret Service cry.”

The visit, he said, “continues to haunt me.”