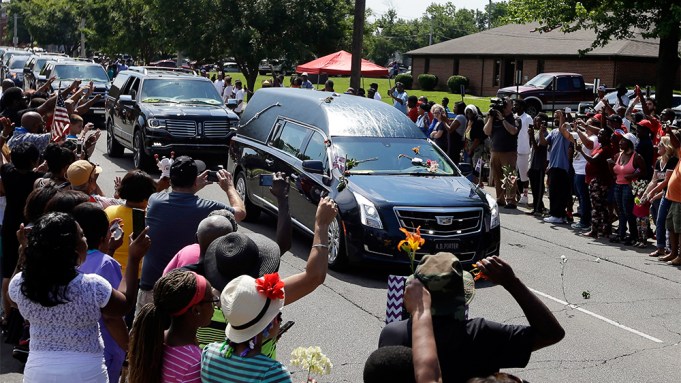 Muhammad Ali will be laid to rest in his hometown of Louisville, Ky., on Friday.

A procession will take Ali’s body through Louisville, giving fans around the city a final chance to say goodbye. That will lead to a funeral service at the KFC Yum! Center in downtown Louisville at 12 p.m. PST. Thousands, including world leaders, are expected to attend the memorial.

Former President Bill Clinton, Billy Crystal and anchor Bryant Gumbel will deliver eulogies at the funeral. Will Smith, who played the athlete in the 2001 film “Ali,” and Lennox Lewis, Britain’s former world heavyweight champion, will serve as pallbearers.

Ali had planned out the details of his funeral service before his death. “Muhammad is directing all of this, and he’s enjoying every minute of it,” family spokesman Bob Gunnell told the Associated Press. “Muhammad wanted this to be a free event, an event that was open to all.”

Ali, who was diagnosed with Parkinson’s syndrome in 1984 — the result of taking too many punches during his years in the ring, particularly at the end of his career — had been hospitalized in Phoenix for a respiratory ailment.