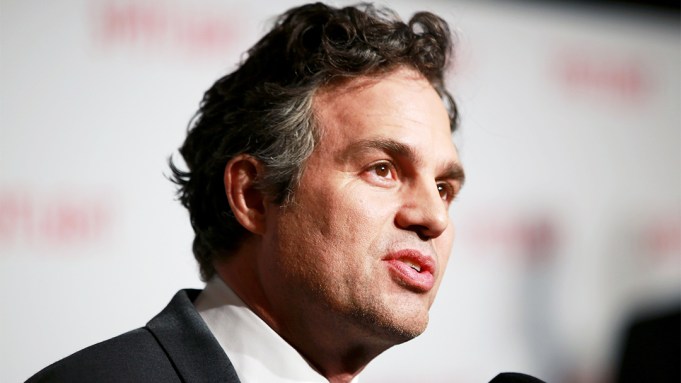 Bernie Sanders’ campaign is rolling out a series of new videos featuring celebrity supporters, with the first debuting on Monday starring Mark Ruffalo and director Matthew Cooke talking about what they see as a “crisis of credibility” in the political system.

In an interview with Variety, Ruffalo, who grew up in Kenosha, Wis., believes Sanders will “crush it” in Tuesday’s primary in the state.  “I would go so far to say that he is going to close the gap in New York,” he says. The Empire State primary is April 19.

Sanders is coming off a sweep of caucuses on March 26 and a continued flood of online fundraising. But he trails Hillary Clinton in the delegate race. She has 1,243 pledged delegates to Sanders’ 980, according to the New York Times.

“Is it a tough, uphill battle? Yes. Is it impossible? No,” Ruffalo says of Sanders’ chances, noting that this campaign season has shown “over and over again” that “conventional thinking has been turned on its head.”

On Sunday, Sanders supporters gathered in front of CNN’s Los Angeles office to protest unequal airtime for the candidate. The rally, with the hashtag #OccupyCNN. Sanders did appear on CNN’s “State of the Union” on Sunday.

But Ruffalo tells Variety that overall there has been a “virtual media blackout of him since the start of his campaign.”

“He has been on a serious media diet for whatever reason,” Ruffalo says. “Part of it is the infatuation and fetish-ization of Trump in the media class.” Where Sanders has been helped is via social media, particularly with his popularity among young voters. “We all kind of joke that we are the media now. We call it Main Street media.”

Ruffalo says that he has brought up the issue of Sanders’ coverage to the real-life journalists portrayed in “Spotlight” and asked, “What is going on?”

“They just basically say that Trump has sucked all the air out of the room,” Ruffalo says. “But no matter what it is, it has to stop.”

Ruffalo says that Sanders has been able to recapture disaffected Democrats by highlighting issues like trade and “business as usual” money in politics.

“What people don’t understand is you have had a mass sort of revolt of Democrats who have left the party, who literally moved to the independent box,” Ruffalo says. “We have to consider what this means. It is not so simple as the party reuniting. It is the rebirth of the party.”

If Sanders does not get the nomination, Ruffalo says that it will be up to Clinton to address how she reunites the party, including how she deals with issues such as money in the system and climate change.

“I think one thing you could do is bring Bernie in, make him your vice president,” Ruffalo says. “You want to have a unified ticket? See something magical happen. That would be a signal to people. It will be up to Hillary Clinton to signal if she wants to bring the party together.”

Clinton has defended her record on climate change, and recently pushed back on what she called lies about donations coming from fossil fuel companies. She also has said that she has been a champion of overturning the Supreme Court’s Citizens United ruling.

Ruffalo says that he “hears over and over again, ‘I love this guy. I love what he has to say. I just don’t know if he is electable.'” He hopes that viewers of the video will “look at it and go, ‘You know what? I am going to vote with my heart this time. I am going to step out on my own. I believe in this guy.'”