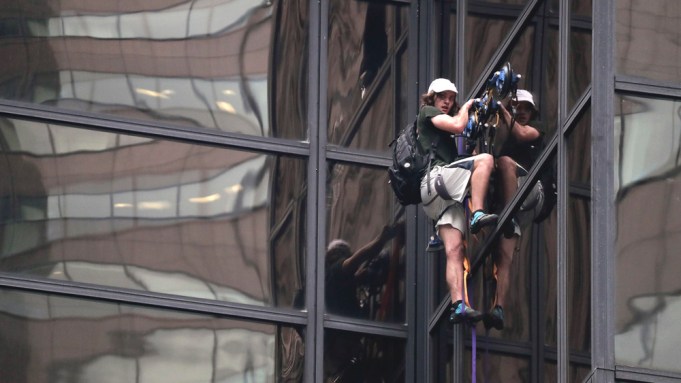 A man is attempting to climb the 58-story Trump Tower on Wednesday afternoon in Midtown Manhattan. It is still unclear why the man began the climb, but so far has been on the climb for two hours.

5th Avenue has been shut down and police responded to the scene and were trying to corral the man. Police had also escorted everyone from the building. Donald Trump was not in the building and has not been there all day. He is at a rally in Virginia and later heading to Fort Lauderdale, according to ABC News.

While his last name has not be revealed, the climber’s name is Steve and he is from Virginia, according to ABC. The climber, a Trump supporter, pre-recorded a YouTube message directed at Trump, saying that he requested a private audience with the presidential candidate to discuss an “important matter.” He climber thought conventional means wouldn’t have worked at getting Trump’s attention.

“Be sure to get out and vote for Mr. Trump in the 2016 election,” he tells viewers in the minute-long video.

An onlooker told ABC News that it seems as if the man held up a paper with an illegible message against a window before he began his climb. Another onlooker said the man looked panicked before he began his climb and also used expletives. The NYPD said that the man starting climbing the Tower at the 5th floor atrium and by 5:30 p.m. ET had reached the 16th floor. The police has been breaking out glass panes to try and intercept him, but to no avail.

NYPD has also set up inflatable pads that would appear to soften the blow if the climber were to fall. The climber also changed paths several times, avoiding the ventilation grates where officers were posted. There is a scaffolding that is making its way down the building but away from the vantage point of the climber, according to ABC News.

One concern has been the possibility of rain. The climber is using what looks like large suction cups which could falter in rainy conditions.