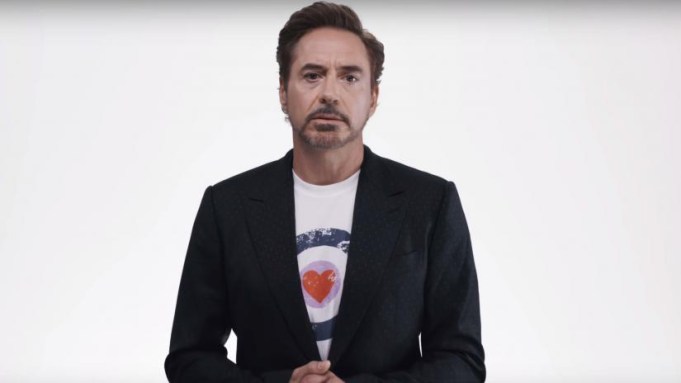 “Just get out and vote.”

That’s the simple message at the heart of Joss Whedon’s final PSA from his Save the Day series. Robert Downey Jr., Scarlett Johansson, Keegan-Michael Key, James Franco, Julianne Moore, Martin Sheen, and Neil Patrick Harris reunited for another video urging Americans to “VOTE TOMORROW.” Whedon first assembled “The Avengers” and other stars for an anti-Donald Trump get-out-the-vote short in September, which was the first of a slew of viral videos from Whedon’s political action committee.

Save the Day — in which Whedon invested about a million dollars of his own money — also released another video, “Blood Money,” on Sunday about the NRA’s influence on American politics, targeting the senators up for reelection who have voted against universal background checks.

Additionally, a Puerto Rican boxer offered a testimonial to Trump’s generosity, Constance Wu of “Fresh Off the Boat” urged voters to support progressives on the ballot, and “Crazy Ex-Girlfriend Star” Rachel Bloom appeared in a Funny or Die spot to urge people to “f—ing” vote.

This election cycle has seen an avalanche of web videos, some from famous filmmakers, in the hope of their unique take on a candidate will break through amid the campaign noise.

Most of them have been anti-Trump and, either blatantly or by implication, pro-Hillary. That’s a reflection of the lopsided support that Clinton enjoys in the entertainment community.

But over the weekend, Lucas Baiano, a filmmaker who has produced videos in the past for Tim Pawlenty and Rick Perry, debuted a video featuring Puerto Rican boxer William Campudoni. The five-minute video is called “American Comeback Story,” and Campudoni talks of how, when he was really struggling in his early 20s, Trump gave him a job that turned his life around.

Martin Sheen recites Rabindrananth Tagore’s poem, Chitto jetha bhayshunyo “Where the Mind is Without Fear,” in a video released by Anonymous Content, which has been releasing spots as part of the #VoteYourFuture initiative.

Meanwhile, Humanity for Hillary released a new spot featuring Wu, in which she urges votes for Clinton as well as down-ballot candidates. The organization has been producing web videos for much of the cycle, and this spot was written and directed by Laura Dawn, and produced by Sarah Sophie Flicker and Jocelyn Hayes Simpson. It’s called “Get Down With the Down Ballot.”

The latest Funny or Die spot, “Holy Sh*t (You’ve Got to Vote)” is a musical exhortation to vote, and to vote against Trump. It also features Elizabeth Banks, Mayim Bialik, and Jane Lynch.