Jennifer Lawrence Has Nicknames for Celebrities She Doesn’t Like 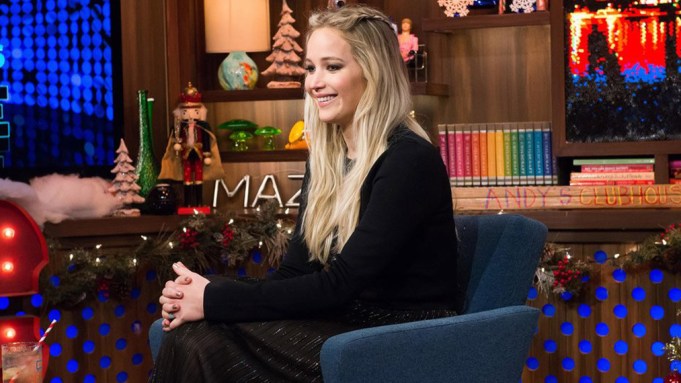 If you cross Jennifer Lawrence, you may end up getting a nickname like “the lady” or “pickle.”

During the “Passengers” star’s appearance on “Watch What Happens Live” this week, Lawrence revealed, with the help of her best friend Laura Simpson, that she refers to certain celebrities she doesn’t like by various nicknames.

The pair were playing a game called “Shush, You BFF Lush,” which involved Simpson being asked random questions about Lawrence and either choosing to answer them or take a sip of her cocktail.

The questions started out more innocently, with Lawrence hardly hesitating in admitting that her celebrity crush is Larry David. However, Simpson, perhaps wisely, elected to drink on questions like who’s “one celebrity your BFF refuses to do a movie with,” and what’s “the grossest habit you’ve caught your BFF doing?”

Simpson is then asked “without naming names,” what’s the “meanest thing your BFF said about a celebrity,” to which she revealed that Lawrence has “a lot of nicknames for certain celebrities.”

“The lady has different variations; there’s the raging lady, the lady in red, the lady in waiting,” Lawrence added, while the show’s host Andy Cohen shook his head in disbelief.

Still, the question remains on the minds of Cohen and everyone watching, who are the mysterious nasty celebrities that Lawrence has dubbed “the lady” and “pickle”?