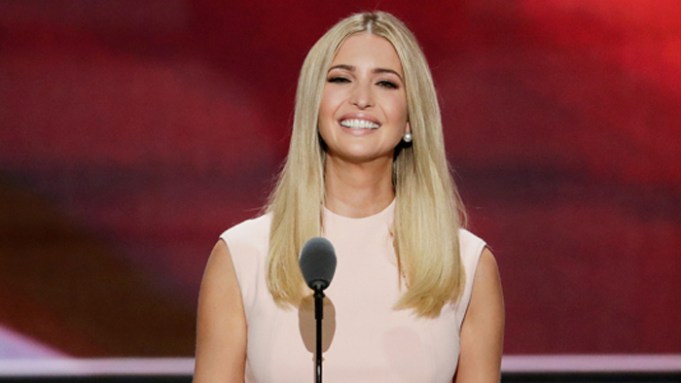 Ivanka Trump used her prime speaking slot on the final night of the Republican convention to stake out equal pay and affordable child care as key issues for her father, Donald Trump, now that he has secured the party’s nomination for president.

The younger Trump was given the assignment of introducing her father for his nomination acceptance speech. She was also tasked with illuminating the kinder and gentler side of her father and talking up his commitment to women’s issues — a bid to counteract key tenets of the platform of Donald Trump’s Democratic rival, Hillary Clinton.

The younger Trump offered up examples of him reaching out to strangers with help and job opportunities after reading about injustices and tragedies in the newspaper.

The elder Trump possesses “the kindness and compassion that will enable him to be the leader that this country needs,” she said.

Ivanka Trump talked up her father’s track record of hiring and promoting women in his many companies. She asserted that he had more female executives than male at his companies and that women are paid equally as their male counterparts at his firms.

“He will fight for equal pay for equal work. I will fight for it too right alongside of him,” she said. The push is clearly an effort to combat a big thrust of the campaign of his Democratic rival, Hillary Clinton.

Trump cited statistics indicating that the biggest driver of pay inequity was not gender but motherhood. She vowed that her father would “change the laws and focus on making quality child care affordable and accessible for all.”

Trump walked out on stage to the soundtrack of the Beatles’ hit “Here Comes the Sun.” She is considered the most business-savvy of his four adult children. Trump is married to Jared Kushner, a real estate investor whose holdings include the New York Observer newspaper.

She spoke of playing with Lego and Erector sets on the floor of her father’s office and learning the real estate business by visiting construction sites with him. She learned first-hand that the business of building is a “meritocracy” where competence is the only determinate.

“He is color-blind and gender-neutral,” she said. “He hires the best person for the job, period…
When Donald Trump is in charge all that counts is ability, effort and excellence.”

In closing she described her father’s innate optimism and love for his country. She asserted that the would bring “fresh perspective” and “brave new solutions” to the nation’s problems if he wins the White House in November.

“He’s the single-most qualified person to serve as chief executive of an $18 trillion economy,” she said.