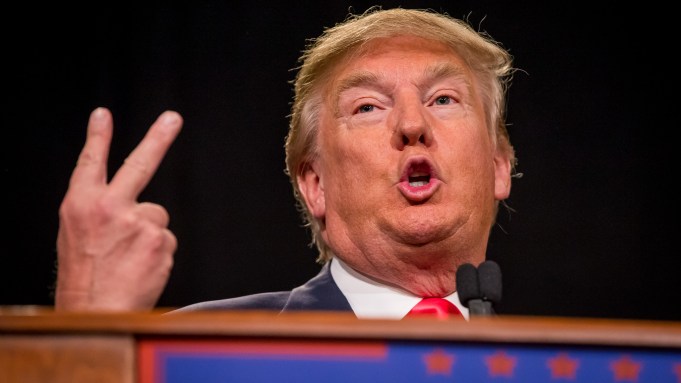 MANCHESTER, New Hampshire — Donald Trump revved up the faithful Monday night at a packed rally at the Verizon Wireless Arena here that included the GOP frontrunner repeating a vulgar insult hurled at fellow Republican Ted Cruz by an audience member.

Trump hesitated for a beat after a female member of the crowd yelled “he’s a p—-” while Trump was discussing his surprise at Cruz’s hesitation during Saturday night’s ABC News Republican debate when asked for his views on water-boarding as an interrogation tactic. But Trump repeated the woman’s comment, referencing female genitalia, and then made a show of “reprimanding” her for the benefit of reporters in attendance. “Ma’am, you’re reprimanded. Can she stay? This is a serious reprimand…for the press,” he said.

About 5,000 supporters battled a snow storm to cheer and boo as Trump laid out his plan for “making America great again” and took aim at various targets.

Trump had no shortage of bravado — he predicted a huge margin of victory in Tuesday’s primary vote, and he cited a new poll showing that he’s “beating Hillary (Clinton) so badly in the general election.” But he also hammered the message that his “movement” needed every last vote.

“This is our final love fest,” he told the crowd. “Tomorrow will be an even better one. You have to get out and you have to vote no matter what.” Noting the bad weather that supporters would be heading into as they drove home, he reinforced later: “If you’re going to go out and drive like a maniac, do it tomorrow after you vote.”

Trump was full of ire for a host of other subjects, in remarks that characteristically veered from topic to topic. He brought up NBCUniversal CEO Steve Burke early on, saying that the exec tried to convince him to renew his deal for NBC’s “Celebrity Apprentice” and didn’t believe that he would run for president. NBC has since reconstituted the show with Arnold Schwarzenegger as host.

Trump proved his showman’s reputation during the roughly 45-minute speech, which was delayed by nearly an hour when he got caught up in a weather-related traffic jam. He delivered applause lines and boo lines like a seasoned performer, and introduced the Trump family cast of characters, notably his wife Melania and daughter Ivanka, the latter of which is due to have a baby in about two weeks. “If she has the baby tonight in New Hampshire that guarantees victory tomorrow. Please Ivanka, have the baby tonight,” he joked.

Trump took aim at a host of familiar targets: “criminal illegal aliens,” who he promised to deport to their native countries; Obamacare, which he promised to repeal and replace with a system that could save up to $300 billion a year through competitive bidding; “stupid trade deals” made by “political hacks” that are shipping jobs outside the country; and his Republican competitors including Marco Rubio.

But nothing generated quite the response as his oft-repeated vow to “build a wall” to protect America’s border with Mexico. The goal is not only to curb undocumented aliens but the flow of heroin and other drugs.

The crowd, packed with teenagers and young adults, let loose with a chant of “USA! USA! USA!”

After a few seconds, the call and response continued. “And who the hell is going to pay for the wall?” Trump questioned. “Mexico!” the audience replied. Trump noted that Mexican president Enrique Pena Nieto was quoted recently as saying the U.S.’s neighbor to the south had no intention of paying for any wall. “The wall’s just going to get bigger when he has that attitude,” Trump vowed.

Overall, the presentation was as polished as the reality series that Trump hosted for more than a decade. He bragged (“I did win Iowa when you count the Carson votes”), he cajoled (“We’re going to have so many great things”), he scoffed (“Obama says the biggest problem we have as a country is global warming”) and he mocked (“I don’t like Donald Trump’s tone,” he said, mimicking Clinton and Jeb Bush). He engaged in a bit of media bashing here and there while also bragging about his ubiquity. “That’s when you’re really hitting it big — when you’re on the cover of Time magazine and you don’t even know it,” he said, referring to last week’s issue.

Most of all, Trump gave voice to the anger that was on display among many attendees. At least two protestors were hustled out of the arena without incident. Before Trump appeared on stage, an overhead announcement coached the crowd on how to respond should a disruption occur in the crowd: “Please do not touch or harm the protestor.”

Amid the barbs and jabs, Trump like every other politician on the planet, sought to convince his troops that there’s a better world on the horizon, just after Election Day.

“You won’t be angry anymore. You’ll be happy,” he said, dropping his voice a decibel or two. “It won’t take a long time.”