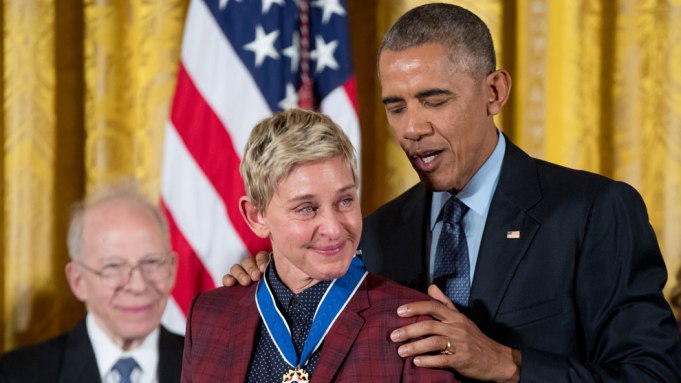 Ellen DeGeneres was one of 21 recipients honored Tuesday with the Presidential Medal of Freedom, a prestigious award granted to individuals who have contributed to notable change and progress in the United States.

A White House aide summarized DeGeneres’s defining career, noting her courage in coming out during a time when marriage equality was not prevalent in the U.S., which aided the progress of LGBT equality.

“In a career spanning three decades, Ellen DeGeneres has lifted our spirits and brought joy to our lives as a stand-up comic, actor and television star,” he said.  He continued, “At a pivotal moment, her courage and candor helped change the hearts and minds of million of Americans, accelerating our nations constant drive towards equality and acceptance for all.”

The aide referenced DeGeneres’s well-known role as Dory in Finding Nemo as a way in which she has encouraged further progress through her activism.

“Ellen DeGeneres has showed us that a single individual can make the world a more fun, more open more loving place, so long as we just keep swimming,” he said.

As President Obama bestowed DeGeneres with the medal, the comedian teared up, after Obama made a statement about DeGeneres’s extensive efforts towards not only the LGBT community, but also to the nation as a whole.

“It’s easy to forget now when we’ve come so far, where now marriage is equal under the law, just how much courage was required for Ellen to come out on the most public of stages almost 20 years ago,” President Obama said. “Just how important it was. Not just to the LGBT community, but for all of us.”

He continued, “Ellen counters what too often divides us, with the countless things that bind us together, inspires us to be better, one joke, one dance at a time.”

The Presidential Medal of Freedom is the highest honor a civilian can receive, and recognizes individuals who have made contributions to world peace, culture or other national interests of the United States. This year’s honorees include Bruce Springsteen, Kareem Abdul-Jabar, Michael Jordan, Bill and Melinda Gates, Tom Hanks, Vin Scully and notable others.

Black-ish star Tracee Ellis Ross shared a video on Twitter featuring the recipients doing the Mannequin Challenge in the White House. Ellis Ross was in attendance to support her mother, Diana Ross, another recipient of the award.

Look what I got everyone to do! It’s the #MannequinChallenge at the @WhiteHouse! I'm in the pink dress laughing with @RitaWilson! pic.twitter.com/fYPvYcMJ57

“Look what I got everyone to do! It’s #TheMannequinChallenge at the @WhiteHouse!, the actress posted. “I’m in the pink dress laughing with @RitaWilson!”