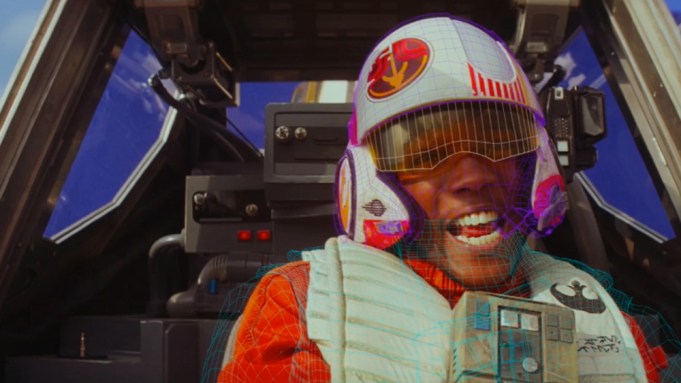 “This will begin to make things right,” goes the first line of “Star Wars: The Force Awakens.” It’s a sly double entendre, as it promises a return to the joyous spirit of the original trilogy — and a rejection of the lifeless, synthetic feeling of the prequels, which frustrated many fans.

The original “Star Wars” (later renamed “Episode IV: A New Hope”) astonished audiences with both its imagination and its novelty. So what if it was a deliberately hokey genre mashup with cheesy dialogue? Visually, it was unlike anything that had ever been seen before, and it explored mythic themes through a fully realized cinematic universe, long before that term was fashionable.

As shown in a special double episode of Variety‘s Artisans video series (pictured), director J.J. Abrams, visual-effects supervisor Roger Guyett and the massive effects team of “The Force Awakens” wanted to recapture that energy and heighten the franchise’s sense of realism. Much of the vfx footage in this episode has never before been released for public viewing.

“We just wanted it to feel like you were really on this ‘Star Wars’ journey in the movie,” Guyett says in the video, “and all these things were really happening. And that is not a simple thing to do.”

Guyett, who was also second unit director on “The Force Awakens,” tried to treat visual-effects production just as he does live-action photography. “What can we do to take that shot and make that shot more interesting? Or more believable?,” he says. “You want a shot of the speeder running across the desert or something, and then you start thinking, how can you make that better? ‘Oh, it’d be fantastic if there was an old piece of X-wing in the foreground; I’ll dolly through that.’ We’re trying to take those shots and make them as exiting and as interesting for the fans as we can.”

Compared with the intricate images digital vfx can deliver, 1977’s “A New Hope” seems simple. But as Industrial Light & Magic’s vfx supervisor on “The Force Awakens,” Patrick Tubach notes, “to those guys at the time it was all new.”

The effects team that was assembled for that film (which became the core of Industrial Light & Magic) was using the most advanced technology of the day to run high-speed cameras, motion-control rigs, models and miniatures. “I can’t tell you how many times they said, ‘We don’t know if this is going to work. We’re just going to try it and see what happens,’”  Tubach says.

“The Force Awakens” team set out to recapture that risk-taking spirit, even though digital vfx are well-established and familiar to audiences. “You just have to constantly one-up your ability to handle more and more and more,” Tubach says. Improvements to digital production can be esoteric software upgrades, harder to visualize than a new way of operating model spaceships, but the results can be dramatic.

For example, ILM built a simulation pipeline that added realism to such details as dust clouds on Jaaku and snow thrown into the air as the Millennium Falcon skids to a halt on wintry Starkiller Base. Says Guyett: “I don’t know how you describe how much better they are, but it just allows us to create better and more realistic images.”

Yet “The Force Awakens” also went back to the franchise’s indie roots by relying on practical effects – sometimes very simple ones. Rey’s speeder had wheels, which were digitally removed, but it also had a built in exhaust blowers to kick up dust.

“There’s a look to it that is not exactly what you would expect,” Tubach says. “And I think, you know that lends a believability to when we go and recreate it in CG.”

Technology has marched on for special effects (that is, practical effects photographed live on the set) as well as for digital effects. But the team on “The Force Awakens” learned that sometimes there are no f/x like the old f/x.

“We experimented with things like blaster hits for example,” says special effects supervisor Chris Corbould. “We tried different ones. But we, we came back to more or less the same blaster hits they had in ‘A New Hope.’” Those blaster hits are about as simple as a pyrotechnic effect can be: a small black-powder charge, which can be planted in a set piece or a stormtrooper’s armor.

“It gives a bright red flash and a lot of smoke coming off,” Corbould says. “Everybody could identify with them, and they weren’t all the sudden seeing something that was totally alien to what they’d grown up with.”

That’s one area where Abrams, Guyett and the filmmakers of “The Force Awakens” have learned the hard lessons of the  “Star Wars” prequels: Make it look better where you can, but if something ain’t broken, don’t fix it.