‘Parks and Recreation’: What the Cast Will Miss About Their Characters 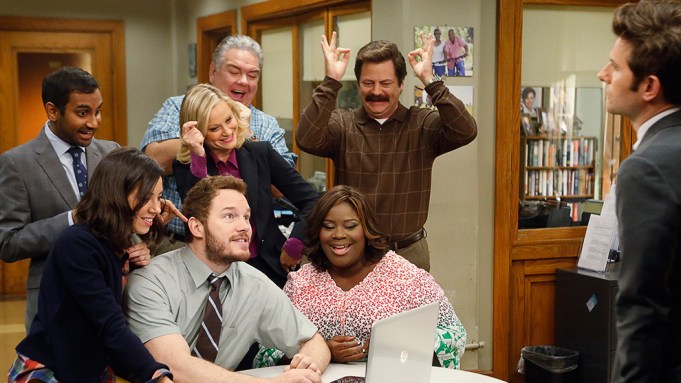 As “Parks and Recreation” begins its farewell season on NBC, it’s not just the fans who have to come to terms with the show’s end. It’s also the cast.

Leave it to Jerry to sum it up best: “I think most of us have always been very very appreciative of this job, but even more so than ever now,” says Jim O’Heir.

With the show coming to a close, Variety asked the stars of “Parks and Recreation’s” final season what they’ll miss most about their characters.

Amy Poehler (Leslie Knope)
“I had the greatest job because I would go in in the morning and basically my job as Leslie was to stand in front of all of my friends and tell them how wonderful they were. And also tell them the plans for the day. It combined two things I really enjoy: telling my friends how much I love them and also telling them what to do.”

Nick Offerman (Ron Swanson)
“I’ve never had a role where they let me be so silent. I’ve been angling for it my whole life and everyone keeps saying, ‘Talk faster! Why are you taking a pause?’ For some reason these writers said, ‘We think it’s funny when you just make a face.’ Hopefully I’ve opened the door so others in the future will let me be silent.”

Jim O’Heir (Jerry Gergich)
“Jerry can put a smile on his face after horribly embarrassing moments. He still somehow can just walk away fine. I don’t do that in life, I get pissed. Jerry also doesn’t have road rage, I have crazy road rage.”

Aubrey Plaza (April Ludgate)
“It’s really nice to have a gig where you can show up in the morning and be in a terrible mood or hungover or tired and be able to deliver your lines just so, and not have to do anything. Hating everyone is a quality I will miss in April Ludgate. You don’t get that in a lot of characters.”

Retta (Donna Meagle)
“Everyone always says to me I don’t get a lot to say, but when I get to say something it has an impact. (Donna) has a moral code and she’s loyal. Even though she can be put off, she always still cares.”

Adam Scott (Ben Wyatt)
“Mike (Schur) and I didn’t know each other at all when I started on the show. I felt like he was using some special powers to get inside my brain because I immediately connected with the character and what he was writing. It just felt so right and it never wavered.”

Aziz Ansari (Tom Haverford)
“(Tom) was such a silly, fun character to play. It was always fun to pick his clothes with the costume department, just deciding what he would wear.”

Chris Pratt (Andy Dwyer)
“I’m not gonna miss anything about the character so much because I can always just watch it on TV if I want to. The thing I’ll miss the most is the creative, ad-libby, improvisational looseness to this process with this specific, exceptional, and wonderfully talented group of comedians. That’s what I’m gonna miss, being in the heat of the moment and sparring back and forth.”