Mike Schur reflects on avoiding cancelation, winning awards and getting past 100 episodes 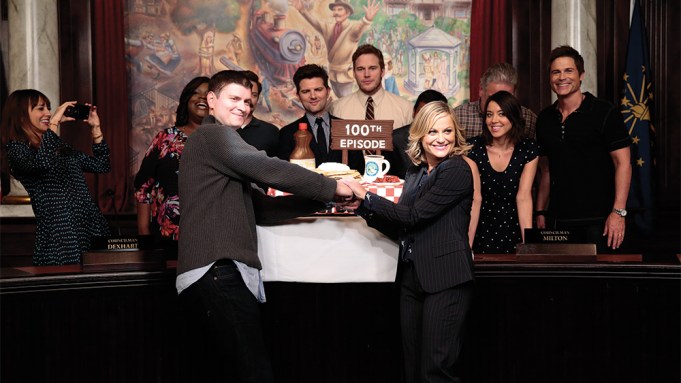 Over six years on the air, “Parks and Recreation” experienced more highs (acclaim, awards, 100 episodes) and lows (a rocky launch, near-cancellation) than the audience at a Mouse Rat concert.

APRIL 9, 2009
“Parks and Recreation” premieres to incorrect assumptions that it’s a spinoff of Peacock lead-in “The Office.”
“(Co-creator) Greg Daniels is very fond of saying, and I think he’s right, that the cast was great before the show was great. … It didn’t matter how many times we gave interviews or talked about how it wasn’t an ‘Office’ spinoff. I think there were probably a number of people who watched the pilot and were like, ‘I don’t understand. Is this a different branch of Dunder Mifflin somehow?’ (‘Parks’) was a little bit brighter and a little bit louder and a little bit sillier probably. We needed six or 10 episodes to figure that out.”

SEPT. 17, 2009
Season two premiere “Pawnee Zoo” finds Leslie unwittingly presiding over a wedding between two male penguins, and cements the show’s smart, funny, sweet tone.
“One of the things I think would have done in season one if we had more time or more episodes is to take issues floating around in the world and make them into stories. We thought we could take national issues and bring them down to the very local microcosmic level … I think that episode went a long way towards explaining that that’s what the show was going to be to people. It was really a show about a woman trying to help her community any way she could.”

JAN. 30, 2010
Despite so-so ratings, the show scores a mysteriously early third-season pickup. Once the writers finish season two, they immediately get to work on the first six episodes of season three.
“We did 24 episodes in season two, and they picked us up in January for season three largely because Amy was pregnant and the only way to be on the fall schedule was to keep going right into season three. Then they ended up holding the show for midseason. It was sort of all for naught. But I’m very happy that happened because the writing staff was really in a groove. We did a bunch of episodes at the end of season two where they just were breaking really easily and we felt like we had figured something out. (The beginning of season three) is when we conceived of the Harvest Festival, and then that became a real template for the rest of the run of the show: these big projects that (Leslie) took on.”

MAY 13, 2010
The ensemble expands with the addition of Rob Lowe and Adam Scott as new regulars (and original cast member Paul Schneider quietly departing).
“I was a big ‘Party Down’ fan, and we started kind of thinking about adding a character to the show. I really wanted (‘Party’ star) Adam Scott and I talked to NBC about it and they were like, ‘Yes, we love him. He’s really funny.’ Then (former NBCU TV chairman) Jeff Gaspin called us and said, ‘Hey, Rob Lowe is going to be available. He’s leaving “Brothers and Sisters”and we think he might be a really good addition to the show.’ I love Rob Lowe and it was a very good sign, everybody thought, that NBC actively had an idea for our show. It’s like, ‘They care!’ I thought, ‘What if we try to shoot the moon here and throw both of them in and see what happens?’ They were cool with that.”

JULY 14, 2011
“Parks and Rec” scores its first (and only) Emmy nom for comedy series.
“(The series nom) was really great because that had been such a tumultuous time with (Amy) getting pregnant again and then essentially making 30 episodes in a row without a break and having a very unknowable fate. … The normal ebb and flow is there’s a moment in time when people nominate you for things and then it goes away. If you put too much stock in it or too much self-worth into it then you’re just setting yourself up to be angry and sad for no reason. We always tried to remember that.”

MAY 11, 2012
The renewal for season five comes down to the wire, after several erroneous reports that the show is canceled.
“I don’t think I ever felt like, ‘Uh-oh, we’re getting canceled.’ We always felt like we didn’t know. Every season finale was (written as) a series finale starting with season three on. In season five we did it twice, when we did Leslie and Ben’s wedding halfway through the year. We never took anything for granted. I felt at a certain point that the worst feeling to have would be if we got canceled and hadn’t properly written an ending for the show.

JULY 2012
Over the summer, producers approach Senators John McCain, Barbara Boxer and Olympia Snowe for guest spots, and shoot a secret cameo with Vice President Joe Biden to air after the election cycle.
“By that point it felt like the show had been around long enough that we had a chance. I think what happened was if the senators and/or the Vice President themselves weren’t intimately familiar with the show it appeared that a lot of their staff members were. So they all have some 28-year-old people who watch the show and are fans of the show who would say to them, ‘You’re okay. They’re not going to do anything mean to you.’”

MAY 9, 2013
Another renewal means the show will hit a major milestone 10 episodes into season six, so long as nothing goes wrong.
“When we got picked up for season six it was like, ‘Oh my God, we’re going to hit 100.’ I remember thinking, ‘Everyone be quiet. As long as no one insults Bob Greenblatt … it’s right in front of us.’ It was pretty amazing to realize that and then to count it down and get a big giant fun cake with a number 100 on it. Just contemplating 100 episodes of the show at that point was mind-blowing. It easily could have been six (episodes) and out.”

JULY 31, 2013
News breaks that Rashida Jones and season two addition Rob Lowe will exit the series midway through season six.
“We knew we wanted to get (Ann and Chris) back together, and we were plotting that arc long in advance. It was the natural end. The first day we had that discussion, Rashida called me and said, ‘Hey, do you want to have lunch?’ She said that she had gotten this offer to write for Pixar (on ‘Toy Story 4’), which was then kept top secret for two years. … The idea was that we laid (the groundwork) really early (in the season) and we get to give them a proper goodbye. We get to see them plan and then when they actually do leave it’s not sprung on the audience. It was a nice, slow easing out of their characters, which I think is appropriate because they were a huge part of the show.”

AUG. 3, 2013
After three previous nominations, “Parks” finally wins the Television Critics Association award for outstanding achievement in comedy.
“That was a huge high point. I don’t think any art form has taken bigger steps forward, at least no journalistic art form, in the last 20 years than TV criticism. TV is taken very seriously by people. It’s really come so far from being this thing that people saw as disposable tissue paper to an American art form. The fact that that group of critics gave us that award was very meaningful to me and everybody. You know that the TV critics have seen the shows, they do it for a living.”

JAN. 12, 2014
Amy Poehler wins a Golden Globe for lead actress in a comedy, the same year she co-hosts with Tina Fey for a second time.
“I am not ashamed to say that I started crying a little bit. I mean, the ironic thing with her to me is that at every awards show she’s the funniest person at the show … and yet they’re always handing statues to other people. She’s probably a bigger person than I am, but it just drives me nuts. You want someone to go, ‘Here’s a trophy. You get a trophy because you’re amazing.’ I hope that that’s not the last time someone calls her name from a podium.”

MAY 11, 2014
NBC renews “Parks” for a seventh and final season of 13 episodes. Series gets to go out on Schur and Poehler’s own terms.
“Amy and I started talking about it in the middle of season six. We both just had the same feeling: It seems like it’s the right time. So, we had a meeting at NBC and we told them that’s what we were thinking. They were like, ‘That’s what we were thinking too.’ It was a five-minute meeting and it was about something so monumental, at least for us monumental. … We wanted 13 (episodes). ‘30 Rock’ had done 13, and I had talked to Rob Carlock, who was an old friend of mine from ‘SNL,’ about what that was like. I think Amy talked to Tina [Fey]. There’s something that feels very manageable about doing 13 instead of 22. You can just pack all of the emotional stuff into a shorter time period.”