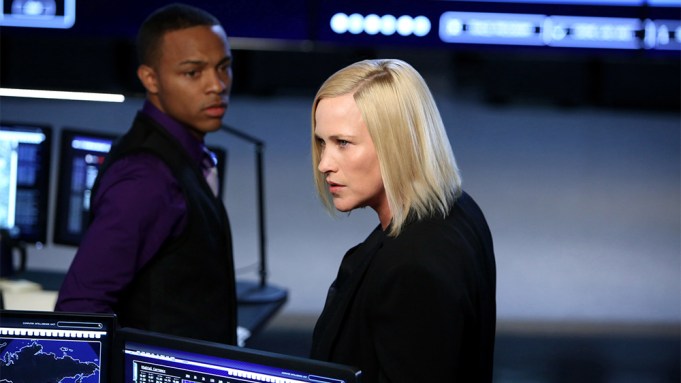 No realistic critic could fairly expect “CSI: Cyber” to reinvent the wheel. Yet even with the modest expectations evoked by a brand extension — one designed, in essence, to give a high-tech sheen to the same old formula — this feels like a particularly tired exercise, one that Patricia Arquette probably would have passed on had she known “Boyhood” would add “Oscar winner” to her resume. As is, there are some talented people here cast adrift in an utterly tired setting, of which little positive can be said except, “Hey, it’s slightly less nasty than ‘Stalker.’”

Like any crime procedural worth its salt, the premiere tries to dig deep into the psyche of female viewers and come up with the most emotionally manipulative nightmare possible. And voila: A ripped-from-the-headlines plot about kids being stolen from their homes after being observed by perps hacking baby monitors. Good luck sleeping tonight, moms!

Arquette plays the D.C.-based team’s no-nonsense leader, Special Agent Avery Ryan, who enlists a former hacker (Shad Moss, aka hip-hop artist Bow Wow) to join the squad. His assistance being all that’s keeping him out of the slammer, the character’s presence is rooted in “It Takes a Thief” and “48 Hrs.,” while providing a modest source of friction with the rest of the crew.

Beyond Arquette, those slumming through the proceedings include Peter MacNicol as her boss, and James Van Der Beek as Agent Elijah Mundo (among the silliest character names in memory), who squanders the sense of cool he generated by spoofing his post-“Dawson’s Creek” image in sitcoms such as “Don’t Trust the B—- in Apt. 23.” Here, Van Der Beek goes through the motions as one of the cyber cops, with a modest backstory that dribbles out before the first three episodes are over.

On its face, “Cyber” (rooted in the work of a real-life “cyber psychologist”) would seem to be timely, coming as it does on the heels of the Sony hack and other legitimate concerns about digital security. The intro, moreover, taps directly into those fears, with Ryan citing “a new breed of criminal” and, noting that she herself was victimized, warning, “It can happen to you.”

Still, that’s just a fancy way of dressing up a 15-year-old cop franchise — one that birthed previous branches in Miami and New York — to see how much more can be wrung out of it. So while the threats might involve the high-tech world of hacking, “CSI: Cyber” is just plain hackneyed.