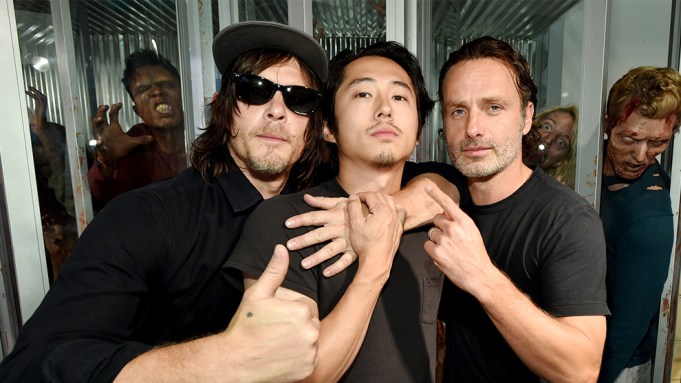 AMC’s “The Walking Dead” will kick off its sixth season with a 90-minute episode on Oct. 11, the network announced Friday from Comic-Con in San Diego.

The start date is in line with previous seasons, as this will mark the fourth straight year that “Dead” has bowed on the second Sunday of October. The season premiere will receive a special screening at New York’s Madison Square Garden, followed by a panel discussion with cast and producers.

AMC also debuted the first trailer for season six, which seems to show Rick (Andrew Lincoln) at odds with Morgan (Lennie James), who arrived in Alexandria last season just in time to see Rick execute a man in front of the traumatized inhabitants of the community. The new footage sets up a power struggle between Rick, Morgan and Deanna (Tovah Feldshuh), with Daryl (Norman Reedus) potentially caught in the middle.

Showrunner Scott Gimple was coy about the implications of the footage, teasing, “We sometimes play with the truth in trailers,” but conceded that “Rick is faced with challenges to the way he does things” in season six. Reedus observed that despite initially being resistant to the idea of Alexandria, Daryl has now found his comfort zone in the insular community, and “that gets tested” in the new season.

It was also announced that “Nurse Jackie” alum Merritt Wever has been cast as a character from the comics, but the executive producers declined to reveal who she’ll play at this stage.

And since season five hinted at the lurking threat of a group of antagonists from the comic books known as the Wolves, Gimple confirmed the villains “will be part of season six, hopefully in a way you don’t expect.”

But the overarching theme of season six will be “them versus us,” Lincoln noted, admitting that those conflicts would take place inside Alexandria as well as outside it.

The season will once again utilize a non-linear narrative, playing with time and including flashbacks, and one episode will take place entirely in flashback, according to Gimple.

James teased that “there will be fallout” from the explosive way Morgan and Rick were reunited, but said that “Morgan and Rick have a particular kind of man-love” and that their connection remains important in season six.

Lauren Cohan couldn’t make the panel since she was visiting family, but sent a text that co-star Steven Yeun then read out, which noted that “my other family is at this table and in this room.” She ended the text with, “Can you say something funny at the end?” — drawing the desired laugh from the at-capacity Hall H crowd thanks to Yeun’s delivery.

The show also attempted to cast another alum from “The Wire,” following Chad Coleman, Lawrence Gilliard Jr. and Seth Gilliam, but the timing didn’t work out this season. “We’re not through with that cast yet,” promised Gimple.

AMC also announced a “Talking Dead Season 6 Preview Special” for Aug. 23 at 8 p.m., leading into “Walking Dead” spinoff “Fear the Walking Dead,” which will premiere at 9 p.m. on Aug 23.

The Chris Hardwick-hosted “Talking Dead” will continue to air after “The Walking Dead” this fall, with its premiere set for 10:30 p.m. on Oct. 11. A new season of “Comic Book Men” will debut the following week with back-to-back episodes starting at midnight.

And as a lead-up to the sixth season of “The Walking Dead,” AMC will air a “5 Sundays/5 Seasons” marathon. Each Sunday from July 26 through Aug. 23, the network will air a single season of the zombie drama starting in the afternoon.