Continue to Variety SKIP AD
You will be redirected back to your article in seconds
Oct 25, 2015 7:00pm PT

‘The Walking Dead’ May Have Just Killed Off Major Character (SPOILERS) 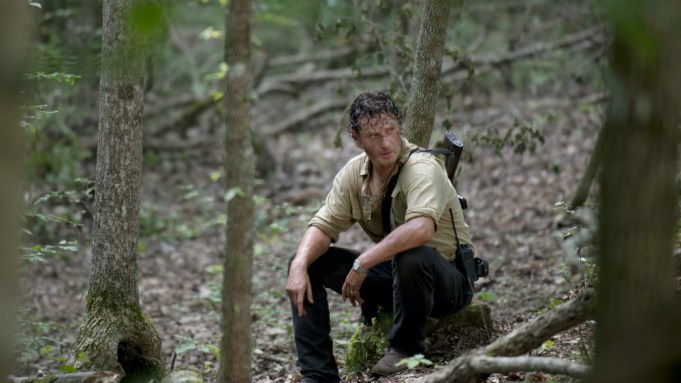 Spoiler warning: Do not read on unless you’ve seen “The Walking Dead” episode 603, titled “Thank You.”

Did “The Walking Dead” just say goodbye to one of its most enduring characters? All signs certainly point to yes, after this week’s episode saw our group of intrepid zombie herders split up to try and make it back to Alexandria, which came under attack by the Wolves in last week’s installment. While Rick broke off from his allies to retrieve the RV, Michonne and Glenn were tasked with leading Heath, Nicholas and a bunch of Alexandrian redshirts back to safety — but, in typical “Walking Dead” fashion, things didn’t go quite according to plan, ending up with Glenn and Nicholas trapped on top of a dumpster, surrounded on all sides by a horde of walkers, which prompted the skittish Nicholas to shoot himself in the head to avoid being killed by the undead.

That act would’ve been forgivable in itself, since no one’s shedding any tears over that guy, but in the process of falling, Nicolas took Glenn over the edge with him, toppling them right into the center of the assembled zombies, who proceeded to tear him apart with the prerequisite geysers of blood. It wasn’t the goriest death the show has ever inflicted on one of its characters (that dubious honor still goes to Noah), but even if we try to rationalize that maybe some of the entrails we saw being dragged onscreen were Nicholas’ and not Glenn’s, it would still take more than tricky editing to get our hero out of that sticky situation.

While comic book fans have been anticipating a much crueler death for Glenn, the show has never adhered too strictly to what Robert Kirkman has written, and the episode certainly foreshadowed the former pizza boy’s demise, opening on his desperate flight through the woods; giving us a brief glimpse of the pocket watch given to him by Hershel in season two; throwing in a couple of mentions of poor Maggie waiting back home; and allowing him to send one last message to Rick via walkie talkie — where he even managed to slip in an affectionate “dumbass” — which was how the duo first made contact way back in the show’s pilot. And that’s not even counting the repeated reinforcement of Nicholas’ unraveling mental state, since the guy looked like he was on the verge of a panic attack all episode long.

You’ve got to appreciate the cruel poeticism of Nicholas inadvertently being responsible for Glenn’s death now after purposefully trying to kill him last season, especially after Glenn went against his better judgment and tried to give the cowardly Alexandrian a second chance (probably why Nicholas’ final words to him were “thank you”). Crueler still is the fact that no one else was around to witness their deaths, which will leave lingering doubts about their fates. Most of the group had given up on Beth before they finally found her again (just in time to see her get shot, because “TWD” is pretty much the most sadistic show on television), and I’m sure Maggie will be holding out hope that he’s holed up somewhere, or perhaps was captured by the Wolves. It’s hard to imagine that she won’t go off the deep end, having lost her father, sister and husband in a fairly short space of time. It’s also possible, since Glenn was lost outside the walls, that he’ll return as a walker, just to twist the knife a little further. When Rick warned “they aren’t all gonna make it,” there was no way he considered Glenn could be among those casualties, and the loss will undoubtedly affect Rick almost as much as Maggie.

I’m not sure whether it says more about me or the show that despite Glenn being one of my favorite characters — and one with so much to live for (unlike Abraham and Sasha, who seem to be goading death on a regular basis lately) — his death didn’t elicit the same sense of loss in me that Beth and Tyreese’s did last season. The moment was certainly given weight, and Steven Yeun’s performance in the episode was heroic and harrowing in equal measure, but with every new death the show piles on, the less impactful it seems. At this point, it feels like only losing Carol would devastate me. I think it’s just that I, like many of the survivors on the show, have become inured to the violence and misery that punctuates the lives of these characters on a weekly basis, which isn’t necessarily a shortcoming of the series itself, so much as personal taste. Or I’m dead inside — totally possible.

Like last week’s brutal and transfixing episode, “Thank You” also served to thin the herd and get rid of some of the hapless Alexandrians who couldn’t adapt fast enough to survive. Since I had a hard time remembering most of their names, I’m not opposed to this development, especially because Corey Hawkins’ Heath was one of the few to make it home in one piece, and one of the few characters memorable to make an impression. Attempts to develop some of the characters by giving them relationships or acts of heroism were too little, too late to make any real difference. (Sorry “David”?)

One humanizing moment that did pack an emotional wallop was Rick’s discovery of a jar of baby food in the pocket of one of the Wolves who attacked him — raising a moral quandary, given the lengths Rick has gone to in order to protect his own children. Was the Wolf a father, too, or simply grabbing any food he could find — or was it a more ominous clue that the Wolves have their eye on Judith, if they hadn’t already grabbed her?

Much of the episode focused on the lingering mistrust between the Alexandrians and Rick’s group, despite Glenn and Michonne’s efforts to save the stragglers — and while it likely won’t do much for diplomatic relations that Michonne only made it home with two out of probably a dozen civilians, hopefully the survivors will understand why Rick’s group is so paranoid after the Wolves’ attack. Daryl’s willingness to abandon his mission and head back to Alexandria was also a potent reminder of just how attached he’s grown to their new sanctuary and his place within it, to the point where he deliberately disobeyed Rick’s orders and left Abraham and Sasha alone with thousands of walkers on their tail.

The episode also left Rick in a fairly tenuous position — after fending off an unexpected Wolf attack at the RV, the vehicle failed him right as the walkers caught up. Could he be snatched up by more Wolves, tossing him out of the frying pan and into the fire, or will he take his chances doing his best Running Man impersonation and try to hoof it back to Alexandria? With the most able-bodied fighters already wounded, exhausted or dead, now certainly isn’t the best time for thousands of zombies to descend on Alexandria’s walls, but will Rick manage to lead the second group away, or will the Alexandrians have to hole up — or worse, abandon the town altogether — if the walkers come a’knocking?

While the first episode of season felt self-indulgent at times thanks to its extended run time and infuriating flashback structure, the last two episodes have been pure adrenaline, reminding us how thrilling the show can be when our characters are on the defensive. Michael Slovis’ confident direction kept up the momentum from last week’s episode, providing particularly evocative flourishes when seeing the world from Nicholas’ traumatized POV, and Angela Kang’s script gave us some standout moments, especially from Glenn and Michonne. Her powerful confrontation with Heath in the pet store allowed her a rare chance to voice her perspective and reiterate just what the group has had to suffer through while managing to retain (most of) their humanity. How long that can last after their latest loss, however, remains to be seen.

What did you think of “Thank You”? Share your reactions below.