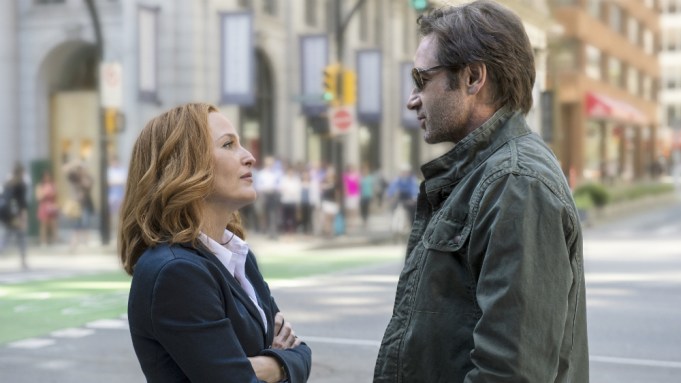 Fox has unveiled the first trailer for its upcoming revival of “The X-Files,” which is set to premiere in January 2016. The network debuted a slightly different two-part promo utilizing much of the same footage during episodes of its Monday night shows “Gotham” and “Minority Report.”

The new footage captures the same air of mystery and paranoia that became a hallmark of the sci-fi procedural, with plenty of callbacks to the original series, including Mitch Pileggi’s Walter Skinner and the return of the villainous Smoking Man (William B. Davis).

“They police us and spy on us, tell us that makes us safer – we’ve never been in more danger,” David Duchovny’s Fox Mulder insists in the new footage.

It’s not long before Mulder reunites with former partner (both professionally and personally) Dana Scully, played by Gillian Anderson, who warns him, “You are on dangerous ground here.”

Fox will present the first episode of the hotly-anticipated revival at New York Comic-Con on Oct. 10, following its worldwide premiere at MIPCOM in Cannes, France on Oct. 6. The series debuts in a special two-night event beginning Sunday, Jan. 24, following the NFC Championship Game, and continues with its time period premiere on Monday, Jan. 25 at 8 p.m.

According to Fox, the six-episode event series will encompass a mixture of stand-alone episodes and those that further the original show’s seminal mythology. In the opening episode, Mulder and Scully take on a case of a possible alien abductee. The all-new episodes will feature appearances by guest stars including Joel McHale (“Community”), Robbie Amell (“The Flash”), Lauren Ambrose (“Dig,” “Six Feet Under”), Annabeth Gish (“The Bridge”), Annet Mahendru (“The Americans”), Rhys Darby (“Flight of the Conchords”) and Kumail Nanjiani (“Silicon Valley”). Three of the episodes are written and directed by Chris Carter, with the remaining three written and directed by series veterans Glen Morgan, Darin Morgan and James Wong.