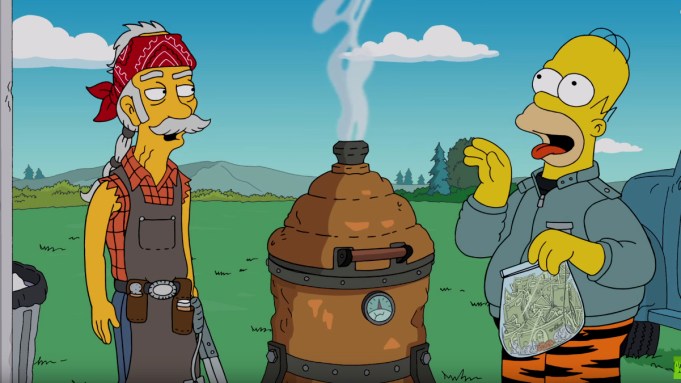 Edward James Olmos, Bobby Moynihan and Alton Brown will lend their voices to Sunday night’s episode of “The Simpsons,” and Variety has an exclusive first look at the episode.

Olmos plays a pitmaster who sells Homer a smoker that has “never been cooled down, never been cleaned — mixing meat, fat and smoke into pure magic.”

The episode sees Homer being challenged to a smoke off against super-chef Scotty Boom, voiced by Hank Azaria, but when his secret weapon smoker is stolen, Lisa and Bart are tasked with solving the mystery.

Moynihan plays Tyler Boom, Scotty’s son, who is upset that his dad spends more time away shooting cooking shows than with him.

Since he plays Guy Fieri on “Saturday Night Live,” Moynihan admits he was trying to stay away from emulating the chef, describing his character as “the Italian version of Guy Fieri.” The comedian says “being a part of the legacy of ‘The Simpsons’ is insane — I remember watching them on ‘Tracey Ullman,’ I remember spending my allowance on a drawing that Matt Groening had done on a piece of paper.”