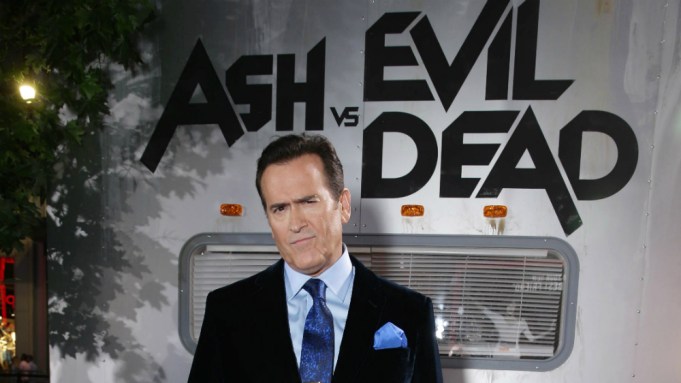 There are no limits to how far Bruce Campbell is willing to go for his fans. “I’ve choked and been blinded for you, the viewer,” the actor told Variety of playing the role of demon fighter Ash Williams in the “Evil Dead” film series.

Directed by Sam Raimi, that trilogy has achieved cult status among horror fans. And now, 22 years since he was last seen in “Army of Darkness,” Campbell returns in the new Starz series “Ash vs. Evil Dead.”

The show premieres, appropriately enough, on Halloween and will run 10 half-hour episodes. Starz has already renewed the gory horror-comedy for a second season, counting on the property’s rabid fan support before they’ve even seen the show.

Ahead of “Ash vs. Evil Dead’s” premiere, Campbell sat down with Variety to tell us where we’ll find Ash after all these years, the appeal of changing the medium to television and why it took so long for his return to the franchise that launched his career. Rumors flew for years of a sequel, and Campbell even admitted, “We lied a lot during those times, because we didn’t know what to say. But we don’t have to lie anymore.”