Watch: ‘The Walking Dead’ Teases Negan Ahead of February Return 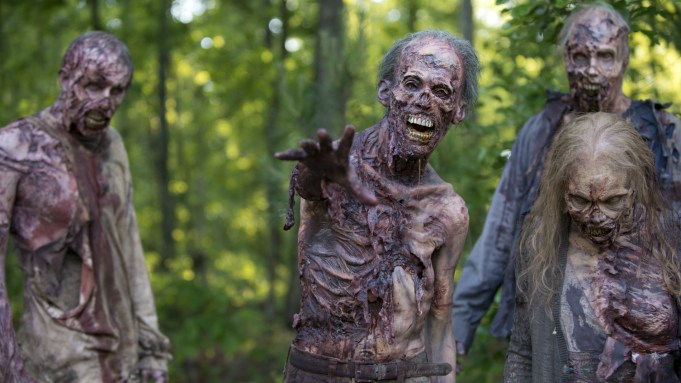 Spoiler warning: Do not read on unless you’ve seen the midseason finale of “The Walking Dead,” titled “Start to Finish.”

While the midseason finale of “The Walking Dead” didn’t debut Jeffrey Dean Morgan’s Negan, AMC did preview the prologue from the next new episode (which doesn’t premiere until February), which sees Daryl, Sasha and Abraham encountering a group of gun-toting men on motorcycles who apparently work for Negan.

Needless to say — given how traumatized Daryl’s captors were after escaping from Negan’s group two weeks ago — the bikers aren’t particularly friendly, ominously demanding that Daryl and co. hand over their weapons and vehicle, along with anything else they possess, because “Your property now belongs to Negan.”

Since Daryl has already had his bike and crossbow stolen, he’s probably not in a very giving mood, but the odds aren’t particularly in their favor with eight armed foes against three. Then again, Daryl just received Eugene’s distress call from Alexandria on the walkie talkie, and they’ll certainly be faster getting home on four wheels rather than two feet. How will our trio get out of their latest sticky predicament? We’ll have to wait until February to find out, but in the meantime, “Walking Dead” creator Robert Kirkman shared a few hints about the mysterious Saviors during this week’s “Talking Dead.”

Aside from the fact that the Saviors are distinguishable from the Wolves by the lack of Ws on their heads, Kirkman reiterated that the two factions are “completely different groups… they’re equal threats, possibly… We’ll be finding out a lot more about the Saviors, Negan’s group, soon.”

Kirkman also shared that he introduced Negan in the 100th issue of the “Walking Dead” comic because he felt that a 100th issue is a natural place for people to stop reading, so he wanted to prove that the series was still doing interesting, shocking things — and he believes Negan’s introduction into the world of the show will serve the same purpose.

“This catalyst is going to be thrown in at some point in the future that’s just going to fundamentally change everything that we are doing,” Kirkman promised.

Showrunner Scott M. Gimple also sent a note to preview the midseason return, promising that “episode 9 is one of the biggest episodes we’ve done,” going on to call it “gargantuan.”

Kirkman’s own helpful tease for the midseason premiere? “So many people die,” he laughed gleefully.

“The Walking Dead” returns for the back half of season six on February 14.