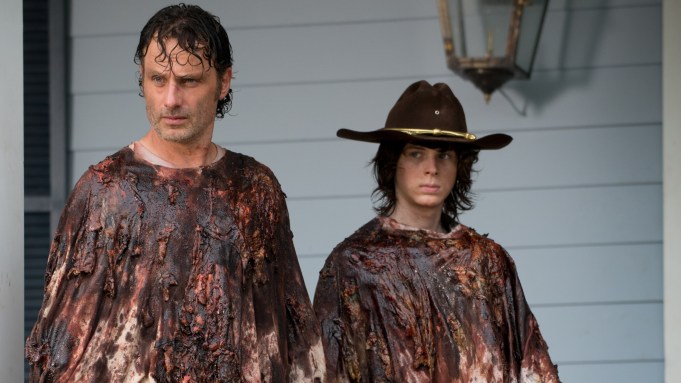 Is it possible to live within the walls of Alexandria?

That question is up for debate in the teaser for the midseason return of AMC’s “The Walking Dead.”

The nearly 30-second glimpse at the second half of the apocalyptic drama’s sixth season shows Lauren Cohan’s Maggie seemingly in peril (perhaps in relation to the sight of Steven Yeun’s Glenn taking a gun to a zombie’s temple) and Andrew Lincoln’s blood-cloaked Rick Grimes. Although he’s still alluded to via scenes from the sneak peek that was released earlier this year, the teaser shows no sign of Negan, the new character played by Jeffrey Dean Morgan.

“Negan is the leader of the Saviors. He’s the new biggest threat, possibly the biggest ever threat that’s ever been introduced in the ‘Walking Dead,'” exec producer Robert Kirkman told Variety in November after the midseason finale. “We’ve announced that Jeffrey Dean Morgan is playing him, and he’s an absolutely amazing actor. He checks every box needed for Negan, which is he’s very personable. You like this guy. He’s very funny. But he’s also extremely intimidating. Very powerful. Just a very wide range of personality traits that Negan encompasses. It was very difficult to find somebody who did check all those boxes. But I’m very happy to say Mr. Morgan does. Negan himself is a catalyst who fundamentally changes what we’re doing with ‘The Walking Dead’ and how these characters exist and really messes a lot of things up for Rick in a lot of terrifying ways. There’s a lot of cool stuff in store for the ‘Walking Dead’ fans when he debuts.”