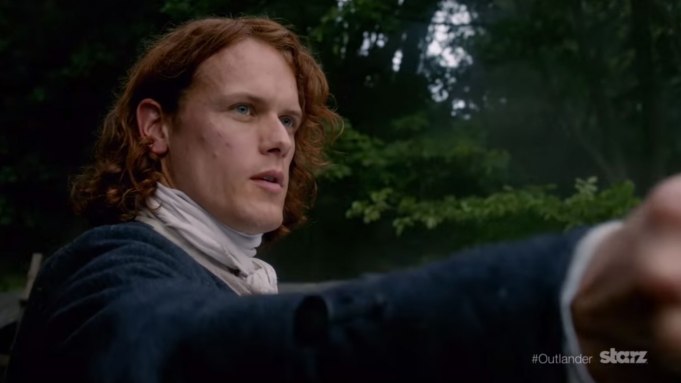 The teaser for the second season of Starz’s historical drama “Outlander” shows that time-traveling Claire (Caitriona Balfe) and her new husband, Jamie (Sam Heughan), have a lot riding with them as they set sail for France — specifically, the safety of the entire country of Scotland.

“Let’s talk about the future and how we’re going to change it,” Claire says before footage of royal halls, epic battle scenes and one very pregnant heroine.

In an interview with Variety, Heughan said that season two will see Jamie “thrust into a world that he’s not wholly familiar with.”

“It’s difficult, from what happened at the end of season one — he’s not quite found his roots and he’s not on even ground, but he’s a very good adapter and he’s adapting to the situation and has a natural ability [for that],” he said. “Ultimately, he does grow with that.”

Based on Diana Gabaldon’s best-selling novels, “Outlander” is executive produced by Ronald D. Moore. It will return in Spring 2016. The teaser is the first item to be released for Starz’ 25 days of #OutlanderOfferings, during which season two photos, cast interviews, holiday recipes and the chance to win special “Outlander” store items will be promoted across the show’s Twitter and Facebook pages.