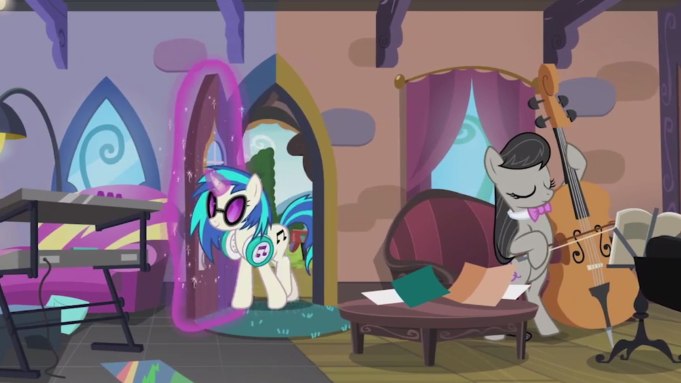 The series, which hails from Hasbro Studios and is based on its parent company’s toy line, follows unicorn pony Twilight Sparkle and her friends Applejack, Rarity, Fluttershy, Rainbow Dash, and Pinkie Pie, who live in the land of Equestria and learn important life lessons.

Despite a concept geared toward kids, the Discovery Family series has welcomed all kinds to the herd. Variety spoke with Hasbro Studios executive director Brian Lenard about the series’ popularity and creating a show that everyone can enjoy. He also shared an exclusive clip from the monumental episode.

Were you expecting the show to get this big and go so long?

When I started on the show, it was my first day at Hasbro Studios. I was working on the pilot episode with (show developer) Lauren Faust. You knew there was something special about the show (but) I don’t think anyone could have anticipated that it would have this level of resonance and be as successful as it became. That’s something that just sort of grew organically out of developing the show and creating stories for it and characters and the audience just sort of ran with it.

My Little Pony was my favorite toy in the early ’80s. Can you tell me how that brand has changed over the years?

What Lauren Faust brought to the table really helped redefine what My Little Pony was. It had become a bit saccharine and sweet, which was fine, but I don’t think it was able to cut through the clutter the way the new version has. This version introduced a deeper layer of mythology and a sort of irreverent sense of humor. It brought really iconic new characters to the brand.

The show is targeted to little kids, but the audience is much bigger than that. How do you incorporate all of that into the storytelling?

Where you thinking of it as a show that families could watch together?

One of the early mandates for the Hub [the former name of Discovery Family] was that it was a channel for the entire family. From the Hasbro perspective, we’re looking at these properties as things that have strong value to parents who watched them before and introducing that to a new generation. That’s always been top of mind as we create a program is what can be great for adults but also work for children.

Are you the favorite of all your friends for their kids’ birthday parties now?

(Laughs) I love going to visit my friends and their kids and sitting down and engaging in these really in-depth conversations. It does make me pretty popular. My friends sort of sit back and marvel and say, “How do you know all of this stuff?” Because I live and breathe it every day. It helps that I love the show, too. I can answer questions from kids about the intricacies of Equestria.