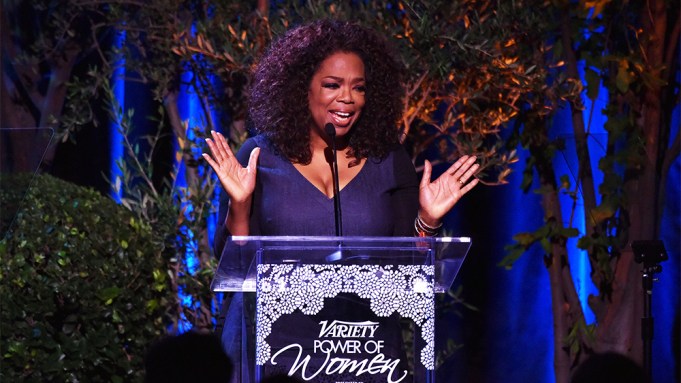 Oprah Winfrey, who was selected this year as a Variety Power of Women honoree along with Salma Hayek Pinault, Anna Kendrick, Gwyneth Paltrow and YouTube CEO Susan Wojcicki, brought down the house at the Power of Women luncheon, presented by Lifetime, held Friday at the Four Seasons Beverly Wilshire hotel in Beverly Hills.

Variety’s biannual event, held both in Los Angeles and New York each year, honors women in the entertainment industry who use their public platform to raise awareness and work toward charitable causes.

Recognized for her incredible work with the Oprah Winfrey Leadership Academy Foundation, Winfrey was the only one to receive a standing ovation at the event. However, in true Oprah fashion, the media mogul, who was introduced by director Ava DuVernay, put the attention on the other women in the room.

“I have always known this about celebrity,” Winfrey said, giving a nod to the public figures in the room. “The real power is understanding that what Salma has done, what Susan has done, what Gwyneth has done, what Rebecca has done, what Jim has done, is you, too, can do [it] because true philanthropy comes from living from the heart of yourself and giving what you have been given.”

Winfrey urged the room to make a difference themselves, continuing, “What we’ve done, you can do. The real empowerment comes when each person leaves this room and makes a decision.”

Becoming weepy while speaking of “her daughters” from her girls’ school in Africa (one of whom was in the audience), she recalled something significant that Maya Angelou once told her: Your legacy is seen in those whose lives you’ve touched. “It’s a beautiful thing to receive an award and to be on the cover of Variety,” Winfrey said. “But the true reward comes from the lives you have been able to touch and you know that you have impacted.”

Hayek Pinault, who was honored at the luncheon for her work with the Chime for Change charity, touched on similar subjects when delivering her remarks. “What gives me a hope is that in a world that is becoming apart, women are coming together,” she said, garnering a huge round of applause from the awe-inspired crowd.

Introduced by Jada Pinkett-Smith, who called Hayek Pinault “the ultimate ride-or-die chick of Hollywood,” the Mexican-American multi-hyphenate spoke of coming to the States as a young actress.

“I thought I was going to be working right away, but I was really worried about the other girls… And I was so wrong,” she recalled of the catty stereotype of competitive women in the biz. “For my very long career in the United States, I have to say, when I am about to die, I will remember with a smile on my face and in my heart, the amazing sisters, the extraordinary friends that I’ve made in this industry. I don’t know if maybe this is the industry that has the best women in the world — maybe because we’ve been so suppressed, we have kind of a bonding.”

Hayek Pinault added that she feels “very confident” that she is part of the generation of change, noting that women in Hollywood no longer just want to be considered for romantic comedies with the fantasy of finding the perfect Prince Charming. “We changed, but no one took the time to change with us in the industry,” she said.

As the packed room dined on a three-course meal and celebratory champagne, Lisa Kudrow took the stage to present the next award to Kendrick, with whom she worked on the Duplass brothers’ upcoming film “Table 19.” Kudrow added, “There are no half measures for Anna.”

The “Pitch Perfect” star was recognized for her work with the Trevor Project, providing crisis intervention and suicide services to LGBTQ teens.

“If you’ve spent any time on social media, you’ve probably seen there’s this sexual revolution happening,” Kendrick said. “And it’s beautiful and it’s fun and it’s exciting, and it gives me hope that this generation is onto something.”

The youngest honoree, Kendrick walked the event’s red carpet with the Trevor Project’s founder, and raved that she was taken by surprise to be named one of the five Power of Women honorees, noting that she can’t believe her face is on Variety‘s special covers for the event. “Fun fact,” she said, sharing a story that raised laughter from the crowd. “The day of my cover shoot, I had jury duty and missed my shoot…I feel like if I had any real power, I could have gotten out of it. I feel like Oprah could have probably gotten out of it.”

“We’re not going to talk about you when you leave and tell you that you can’t be the love interest opposite George Clooney — but you can be the mother,” Witherspoon sassily quipped as she introduced Gianopulos, referring to the topic of ageism and male domination in Hollywood.

Gianopulos, however, took center stage to relay the exact opposite message.

“I hope that someday, the concept of honoring men for empowering women will be obsolete and seem ridiculous. I hope that someday I tell my grandchildren that I received this award and they’ll laugh at me,” he announced, adding that women “don’t need empowerment, they empower me.” The movie studio exec thanked the women he works with and spoke on behalf of the biz, saying, “The talent exists… It’s our job to hire them.” He continued, “Change is happening. It’s happening in the hearts and minds of the industry and there’s a growing recognition that the status quo is simply unacceptable.”

Rosie Huntington-Whiteley, Moroccanoil ambassador for the beauty company’s Inspired By Women campaign, presented the Moroccanoil Inspiration to Action award to Rebecca Welsh of the HALO Foundation, who works with orphans and at-risk children.

Amid the emotional speeches, Lifetime’s head of programming Liz Gateley showed a video of Lifetime’s Broad Focus initiative, which champions female content creators in the industry. Eva Longoria and Queen Latifah are among the many women working with the cable network, which Gateley announced has always welcomed women to be in positions of power.

YouTube CEO Susan Wojcicki was honored for her work with the educational charity Room to Read. “My mom was the first one in her family who was able to go to college. It changed her life, it changed her trajectory, it changed my life and it changed my sister’s life as well,” Wojcicki shared, explaining her commitment to spreading education.

Introduced by YouTube sensation Bethany Mota — who spoke to Variety on the carpet about overcoming cyber-bullying — Wojcicki was proud to be the first female tech exec recognized at the bi-annual ceremony. “As the first woman coming from Silicon Valley for this award, it’s a little intimidating, but it’s wonderful to be here and I really hope it’s an opportunity for these two parts of California to work together more in the future,” she said.

Mega-producer Ryan Murphy took the podium to welcome Gwyneth Paltrow, who he revealed is his child’s godmother.

“As a younger gay, I was also obsessed with the legend of Gwyneth,” he said, referring to her red carpet glamour in the ’90s and many Vogue covers. “But having known her now for 10 years, the thing that resonates with me the most is that none of these things are preoccupied with image or success when it comes to this lady.”

Paltrow, who spoke of her charitable work with L.A. Kitchen, spoke of the times Murphy mentioned, recalling when she was urged not to use SAT words during interviews because career-driven and intelligent women were seen as “ambitious” — and that was a bad thing. Giving kudos to powerful women who have recently shared their experiences of being women in Hollywood such as Meryl Streep, Viola Davis, Patricia Arquette and Ashley Judd, who bravely revealed her own sexual abuse by a studio mogul, Paltrow said, “Today, the power of women rings a bit differently and you can feel the shift.”

“I believe that we are on the verge of creating a new archetype,” Paltrow said, adding that it is now possible to be a woman who is “ambitious, while being a woman who is nurturing, maternal, sexual and for other women.”

The audience applauded as Paltrow spoke of supporting other women. And she made sure to give a nod to the pioneering woman who was the talk of the event: Oprah — or as Paltrow said it best, “The original trailblazer, the mother of us all.”